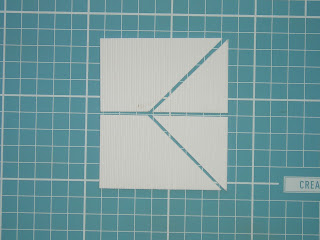 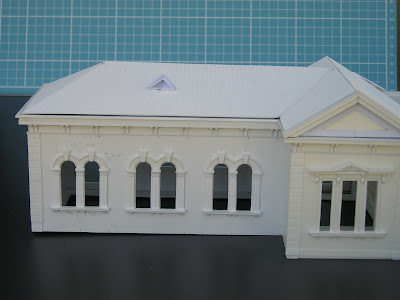 Next stages are to complete the 4 chimneys, 5 roof vents, the platform gable roof edges, the ridge capping,  the rest of the guttering, and downpipes.  Then the two "extensions" that are visible in the 2 prototype pictures in this blog post.  Painting is then probably going to happen, prior to the awnings and verandas being installed.
Still managing my new-years resolution for at least 30 minutes a day on the workbench.   Although I had really hoped to have finished the Wagga building well before now.  Until next time.
Posted by Rob Nesbitt at 19:14 3 comments:

After the last blog post, I looked at the prototype photos of the roof, and noticed that the trim above the corbels was thicker than the trim on the triangle sections.  So before I did anything, I added some additional styrene strips to bulk this area up to match photographs.

I had also thought about guttering.  All of the gutters I had added on my structures up to now, were simply  1.5mm angle styrene strip. Whilst this works, it is mechanically weak.   The Wagga station allowed me to experiment with an alternative, which the below diagram attempts to show

The nibbling tool cut a channel into the styrene that was almost exactly 0.080” deep certainly matched my 0.080 x 0.188 styrene strip (the size I also used to bulk up the walls above the corbels).

These parts were then fitted in situ on the station.  There is no room for sloppiness here – the roof has to fit snuggly, and the end triangles key the roof into the correct position.  I allowed 24 hrs for the glue to fully harden

Adding the corrugated iron was next.  To save material, I didn’t run the full width with the corrugated styrene.  To do so, would have prevented a neat join with the east/west set of roofing iron.  The heavy styrene beams hold the shape well.


So far, I am pleased with the effect.  However, It is just the first step.  There is still a lot more roof to add.  I have not yet decided if the entire roof will be one section, or if I will have the center section removeable (Which may give me a change to have a detailed interior waiting room).  Then there is the matter of securing the roof to the walls (screwing is the thought) – plus the chimneys.

I am still getting used to the new google blog interface  No longer can I preload all my pictures, and select the ones that I want for insertion in the text.   But it does give better stats.  I noticed that my blog-post on oil depots has now passed 1000 views.  It is 350 views ahead of my next most popular post on the Auscision RUB set.  Maybe these are things people search for in Google?

Trust you have found something of interest in my roof construction approach, particularly with the guttering.  Until next time.

The only practical new year's resolutions that I hope to continue well into the new year, is to do at least 30 minutes of modelling each day.  Will see how I go.  So far, the effort has been worthwhile

The Platform side station walls detailing was carried out the same way as the roadside walls.  All were detailed flat on the workbench, and then assembled into sub assemblies.

This was a whoopsie.  And a close inspection of the plan also shows this.  I pondered a while to think how I could correct the error.  I could not come up with a simple fix.  And I didn't want to construct another wall - So, as the platform side is not visible from normal viewing angles, I simply decided I could live with the error.


Next stage will be to add the roof.  I hope this will be a lot faster than the walls

Just before new year, I went down to the Junee Roundhouse museum, renewing my membership, and purchased the latest A5 booklet on the Tumbarumba branch.  It is titled "Wagga Wagga to Tumbarumba Railway - an era of change".  It has a red cover.  Very similar in style to the earlier booklets by the Tumba Rail group, showing a collection of recently acquired photographs - some I found most interesting from a modelling viewpoint.  I believe the booklet is also available for sale at the ARHS bookshop.

Until next time, build a model or two.