Wagga Wagga Signal Box – details
Interior detailing is not something I have concentrated on in the past.    I had limited my efforts to models that could be seen, but in reality, I was more interested in the next project.


But, it was time I challenged myself.  Over the years,  I have seen either first hand, or in pictures, some outstanding structure modelling.  The first was at the Pendon Museum in England – which I visited in 1985.  The models were modelled after real buildings, and the attention to detail absolutely amazing.  I now own many books on the modelling techniques used at Pendon, and these still inspire.
More recently, with the introduction of 3D modelling via CAD, many detail possibilities are becoming reality.  One on the best modellers has been Jack Burgess, on his Yosemite Valley Railroad HO layout.  Jack’s structures were based on the real VYRR, involving much research.  Jack became very accomplished with styrene fabrication, but his modelling of interiors has bordered on the extreme – for instance, turning a HO scale Coke bottle, and half eaten sandwich on a desk.  His station at Merced has a full interior – and to get around the interior being invisible from the outside, Jack has installed a periscope which views the highly detailed interior, and any trains that happen to be passing outside the station window.  He now uses a lot of CAD in his modelling – and his view on 3D printing is that Shapeways have spent $100,000 on a 3D printer, why compromise with a hobby version.
Locally, it is hard to ignore Ross Balderson’s modelling efforts.  His Sydney Station, and Elizabeth Street N scale layout (featured in AMRM issue 288) was museum standard – and his current project of Newcastle takes that modelling standard to the next level.

My modelling has a long way to go to reach these lofty heights.  But, one has to start somewhere, and skills learnt, will hopefully make future projects easier – even if it is “what not to do”

My last blog post on the Wagga Wagga Signal box showed the levers, and the block shelf.  But I knew there were more parts to install.  The disappointment with the UK signal box interior, meant a lot had to be scratch built

I thought I would start with the desk - my Cooma signal box interior picture showed a roll-top desk, which seemed an easy one to start with.

One of the important items was the staff instruments.  But what style were they?  I didn’t have a definitive picture of the instrument in the signal box, but I suspected miniature.  I confirmed this after reading a passage in the book “Safe Signals” which stated that all the token staffs on the Junee-Albury section were replaced with miniature staffs in 1931.  Did anyone make a miniature staff instrument in HO?  Model Engineering Works does make a resin model of a large staff machine, and a purchase would have saved a lot of time.  But, I thought I would see if I could fabricate one.  My result is pictured.  The size was slightly larger than HO, but it was based on the thickness of the 10 thou styrene, and proportioned accordingly.

The pot belly stove was another  part from the UK signal box interior kit that I could use.  Like the staff instruments, it is over scale for HO.  Was this the design used in NSW signal boxes?  Probably not, but until I have a picture, it will do.  A bucket is used to fuel the pot belly stove – which I turned to a conical shape from a large styrene sprue, painted, and filled with “coal”.

The door for the signal box was missing.  Both Wagga, and Bomen had a window in the door, but Greg Edward’s data sheet signal box diagrams only showed a solid door.  I found a prototype window door at Stockingbingal a few weeks ago.  To make it, I tried a different technique.  I cut out a block of DVD plastic to the size of the door, and used a bow pen to draw the mullions to the window.  Then added the styrene strip to the outsides, and painted over the door.  Results are encouraging – and the painted mullions are a lot finer than the styrene ones I made for the windows.  I may have to revisit the signal box windows at some stage.

Each staff instrument needs an external bell to inform the signal man of changes.  I have fitted a block shelf with 3 shelf bells on the wall behind the staff instruments

On the outside of the signal box, I fabricated a stove pipe for the roof.  A “WAGGA WAGGA SIGNAL BOX” sign printed on paper, adhered to styrene, and dull coated to remove the paper look.  To finish, some powder weathering on the roof, and on the clapboard

Still missing is the porch light, and of course the signalman.  Something for the future when I rediscover the microLED lights I purchased last year

An old adage in modelling.  If you model something badly, it is worse than not modelling it at all.  The eye will quickly pick up an error, where an absence is not readily noticed.

Time to move onto something else.

I will leave you with some signal boxes pictures on the south that may be of interest.

As I was growing up in Wagga in the 1960s, the Wagga station became very familiar, as most of the trips to visit the relatives in Sydney, and Melbourne, involved train travel.
It was only later that I thought I could design a model railway based on Wagga, and later still that I became aware of the history. This process is still occurring.

The NSW Railways finally reached “South Wagga Wagga” in 1879.  A substantial building was designed by John Whitton (the NSW Railway Chief Engineer at the time), and  constructed to serve this growing town.  The station was built by Charles Hardy, the same contractor who had constructed the North Wagga Wagga (later Bomen) station.  Whether the station was ready for the first train is still being investigated by the Wagga Wagga Rail heritage group.

The station included a railway refreshment room after 1917, in addition to the standard station facilities.  There was no accommodation, although a number of hotels were situated within walking distance, close to the station.

Over the years, the station has been modified with “additions”, and internal changes to the room layouts, and purpose.  But compared to the current heritage layout, the earlier additions made the station look awkward, and less visually attractive.  My layout will display the roadside view to the aisle, and gives me a dilemma. Whilst it may not be correct to the 1970s timeframe, I prefer to build something that is pleasing to the eye.  The added bonus is that the details of the station can be photographed, and measured.  The downside is that there is a lot more lacework with the heritage station style, and I don’t have the current interior plans.


I am indebted to Bob Stack, as he has provided me with plans of the station to fit the 1970s timeframe.  A earlier (1879)  set of plans in the end papers of the book “The Greatest Public Work” by Robert Lee

Construction of the station will take some time.  All of the window and doors are surrounded by shaped plaster/concrete, which is going to be tricky to emulate in miniature.  The options are

1-    construct from scratch – customwood, brass or plastic could be used.
2-      Use 3D printing.  Most home printers would not give the nice curves, although a rough 3D print could be sanded smooth.  Better printing, such as through Shapeways FUD would leave me with a sizeable hole in the wallet
3-      Laser cut thin layers of card, plastic, or wood, and laminate these into a 3D shape
4-      Cast duplicates in resin, using a scratchbuilt pattern created in step 1, molded in rubber. 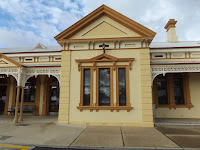 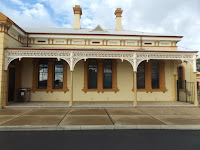 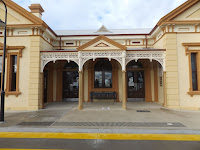 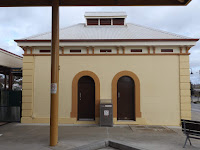 At this stage, I am not sure how many differing types of window and door surrounds are needed.  I am hoping that I will have this answer during the measuring phase.

Then comes the iron lace work.  It  may be possible to print the designs on acetate, although etching a  brass sheet will give a far better result.  Fortunately, this stage is not integral to the main station construction, so I will have time to ponder.

Some of the above techniques are new to me, so I do not anticipate the Wagga Wagga station will be a fast build.   The next step is the photographing, and measuring phase – similar to my Bomen Station build.

I’ll get back to finishing the Wagga Signal box shortly.
Happy Modelling 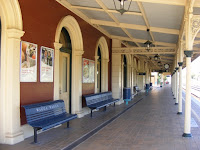 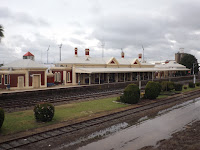