POTPOURRI    Noun:  an unusual or interesting mixture of things:

Over the last few weeks, I have been finding time to work on models to be difficult.  My current model projects are sitting on the workbench. Progress has been slow, as the Bomen lamp room, and the replacement Tumburumba goods shed are effectively duplicates of what I have done and written about before.


But I have started to clear space in my garage, for the future train room.  To start with, I fabricated a set of shelving from scrap wood, and installed it in my newly bought container.  The shelves are just the start.  I have a large wooden bench in the garage, that also has to be relocated – and the process to do this means a lot of shuffling of boxes, and plastic storage bins.

Some of these boxes contained interesting items, including an accumulation of photos - quite a few of Wagga.

Whilst my early photography was slides, the cost worked out a lot more than prints, and I slowly adopted print film.  Prints had the advantage of being more visual than slides, and one could hand them around to your mates at a model train meeting.   Plus there were the negatives, that could be stored for future reprints should the images fade.     Many of these prints were stored in the plastic storage bins, and I rediscovered them during the box and plastic bin shuffle.  In addition to prints, there were also a few wooden boxes of slides, and some older stuff from deceased estates that had been given to me.
I couldn’t resist going through these.  The process is rewarding, although time consuming.   Some of the pictures will aid the Wagga layout, whilst others are nice to view.  In the last few weeks I  have spent some time scanning the images, and I would like to share a few on this Blog.

I recently had also "won" a CCTV system at auction.  There are a few spots on the layout that will be hidden from view - notably the helix, and staging yards.  The 1980s vintage Swann system was cheap,  so I thought I would test it on the kitchen bench.  Unfortunately, whilst it has 4 cameras, the mechanical switching mechanism in the monitor clicks, but fails to advance to the next camera.  Possibly an easy fix, but a task for the future

On the previous blog post, I showed a picture of the Intercapital Daylight train crossing the Sturt Highway (Edward Street) on a bridge, and I mentioned in the comments that the bridge replaced a nasty level crossing.  Well the crossing was replaced in 1979, and as I am planning a 1970 timeframe, I have to include the crossing.


Docker Street.  The manual gates were replaced by automatic lights, bells, and booms prior to 1959.  The cottage still exists, although it was “modernised” almost 20 years ago

-          Edward Street.  The manual gates were replaced by automatic lights, and bells in October 1959, but the gatekeepers cottage remained until sometime after 1971 before being demolished

Best Street.  This crossing was replaced by the Best street bridge in 1925.  The gatekeepers cottage still exists – although it is currently heavily vandalised

Urana Street.  This level crossing was modernised with lights, and bells prior to 1970, and remained until Wagga City Council reworked Urana Street with a new overbridge in the 1970s, and the cottage was demolished.

Finding pictures of the missing cottages has been a challenge.  Last year,  I won on ebay a number of cattle wagon kits from Tony McIwain.  After I mentioned that I am looking at modelling Wagga’s stockyards, Tony informed me that he had been a student at Wagga’s Teacher’s college in the early 1960s, and had a few pictures that I might find interesting.  These images have proven of great interest, and I am indebted to Tony for the images, and the insights on NSW Railways in general

Modelling
A year ago, I purchased a gatekeepers cottage kit from the Stuart Walker’s range of laser cut buildings.  I was hoping that this kit would be a close facsimile to the gatekeeper cottages at Wagga.  Well, as to prove Sod’s law, none of the cottages are close to the kit.  Tony’s pictures of the Edward Street cottage seems to show a weatherboard building.  Whilst Tony's image of the Urana Street is also indistinct, access to the 1971 aerial view (courtesy of Wagga Council Intramaps) shows the  cottage at Urana Street, and Docker street look essentially the same.    As I do have some images of  Docker Street, Urana street will be built to the same design.    Wagga Council Intramaps also show the shape and size of the Edward Street cottage.   I don’t have plans for any of these, so I will be checking out a lot of books for photos of similar cottages.  Best Street’s cottage offers the best (pun intended) opportunity for an accurate model.  Peter, from the Wagga Railway Historical group provided me with plans for the Best Street cottage, and I have more pictures than I have shown here

No discussion of the gatekeepers cottages would be complete without reference to the gates.  Well, last week, a couple of pictures were given to me by Max B, showing the Edward Street crossing with manual boom gates.  These gates were controlled by a signal box.  Whilst I do not have any interior views, the gatekeeper would receive bell codes from trains departing Wagga, and Bomen.  The gatekeeper would then work the gates, and clear the signals protecting the crossing. 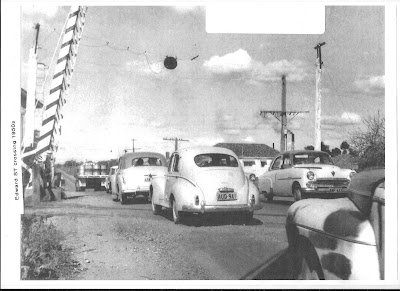 The manual crossing was abolished 27/10/1959, and replaced with automatic lights, and bells.  In the Wagga Wagga Daily Advertiser on the 31/10/1959, had an article describing the experience of a Train driver, John Weisback, who was driving his engine to and from Bomen on the 29th.  His comments were that the new bells and lights were dangerous.  At 9:15am, he narrowly missed a car by 3 foot, and at 4:15pm, taking the engine back, a young boy on a pushbike rode straight through, and only missed the engine by a few seconds.  He asked the question why were no booms installed – as they were at Illabo, Bethungra, and Docker Streets.  (These words were prophetic – not only were booms never installed in the subsequent 20 years of operation, the crossing was the site of many fatalities)
Now the article gives me a hint that there was a loco stabled at Wagga overnight.  I don’t know if it was heading to Junee for a light service, or was it heading to Bomen, to undertake the shunting at the Bomen abattoirs?  If it was the latter, when did this stop?  I know that the Meatworks siding was shunted by mainline trains in the 1980s.  If there was a local shunter in around 1970 time period, that would add much to an operation session.