Progress on the Wagga Wagga, and Bomen signal boxes has been steady, although the  time expended on searching for kits, styrene parts, and coming up some alternate assembly  methods to get around some inadequate kit parts is frustrating.

One of the challenges to create a model, is to accurately size the model from photographs.  Whilst Greg Edwards Lineside data sheet S3 gives the general sizes,  I drew up 2 plans


I guess that the hardest part of this project would be the signal box windows.  I was unable to find any Grandt line windows in my accumulations that could be modified, and lacking the experience to design on 3D, I made up some close enough representations from raw styrene strips.  I hope these pictures are adequate to see my progress.

Progress stalled for a bit, whilst I obtained the clapboard, and strip styrene, and a number of UnEEK signal box kits from the Rosehill exhibition. 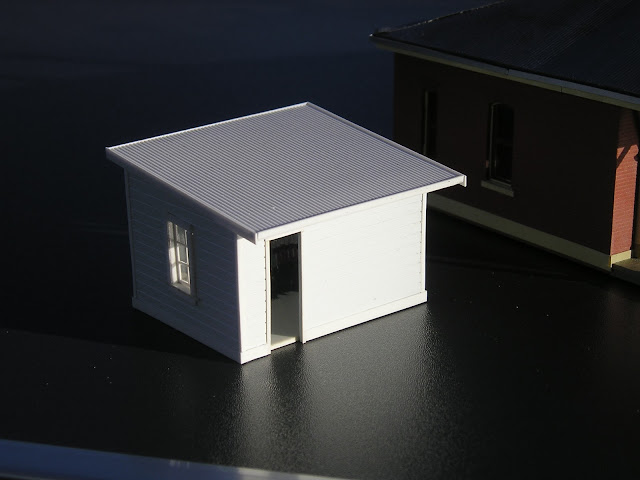 That's it for now.  But I will leave you with a picture from the mainline that is in the "to be modelled" area of my future layout.

Wagga Wagga, and Bomen Signal boxes
The signal box, as the name suggests, is associated with the signalling.  Its purpose though is to control the operation of trains through the station in a safe manner.  It does that by interlocking the signals, pointwork, and controlling the access of trains onto the mainline and branchline with staffs or tokens
Both Wagga Wagga, and Bomen stations had signal boxes.    These boxes lasted until 1983, when they were removed after the introduction of CTC.

The main Wagga box was a standard design skillion roofed structure, although much extended than most on the NSWGR railway system.  Excellent drawings of this general design are on Greg Edwards Data Sheet S3 – Platform signal boxes 1913.  As I have been unable to find the exact dimensions, I have guesstimated the size from photos.  Inside the box, there was a signal diagram, a blockshelf containing the repeater indicators,  a number (3)  staff instruments,  a large  lever frame, phone, plus heater, desk, chair, and other furniture.   It is with much regret that I never managed to look inside the Wagga signal box, as I have only found one inside photo.

The Bomen signal box was also a skillion roof box, but unlike Wagga, the Bomen box was positioned on the platform.  Again, I have been unable to determine the size, and with far fewer pictures, more of a guess.  What is unusual about the Bomen box, is the window placement on the northern wall.  If the window was  positioned in the middle of the wall (as per normal design), the signalman’s view of the railway would be more obscured by the Bomen station building.  I have drawn a plan showing a double width window in this location, which may not be correct either.  My one photo is not clear one way or the other. 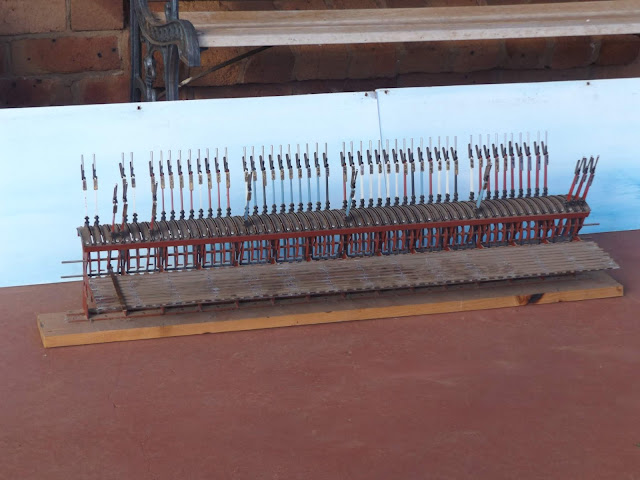 note: the model is scaled approximately 1:10 scale, although the spacing between the levers is greater than the prototypes approx 5” spacing to accommodate the 1:1 scale operators hands.

The first model constructed specific for my Wagga layout was a 56 lever cam and tappet frame.  This was built over a few years when I was living in Queanbeyan, with guidance from Tony Kociuba (Mackenzie in H.O.Lland) .  http://www.mckenzies.net.au/index.htm  My frame is not yet completed.  It has provision for mechanical interlocking just like the prototype (and I will spare you the details – it is not for the faint hearted.  If you are interested, the “links” from the H.O.Lland web site has some excellent examples).  At the rear of the frame, I also need to install electrical slide switches, which will activate the servo motors for the signals and pointwork. Tony recommended that I install all levers, just in case I needed some extra functions later.

The Bomen frame was a more modest 20 levers, and whilst I do not have a frame built, I may commission Dale Richards to build it for me.   The other aspect of interest is the “staff exchange platform” – which was used by the signalman to exchange staffs giving permission to the train driver to enter the next section of line.  In my operation, I hope to employ staff working over the Murrumbidgee River bridge

I have made a start on constructing the Bomen signal box.  More details in a future blog post.  But here is a teaser picture

If you have read this far, and are wanting far more information on signal boxes, may I recommend that you contact Bob Taaffe.  Bob Taaffe has done a number of presentations at the Modelling the Railways of NSW, and is extremely knowledgeable about NSW signal boxes, and workings.  Bob is currently about to publish (in 4 volumes) a comprehensive guide to signal boxes throughout NSW.  He is presently taking orders for the first volume, but you will need to be quick, as the cutoff is July 1st 2019. Bob is self publishing the book, so  it is unlikely that the book will be re-run.  Price including postage was $110.  Contact Bob at    signalboxbook@gmail.com

Whilst on many home layouts, the signal box is an interesting piece of architecture, I am hoping to use them in a very prototypical manner.