Scenery has never been my strong suit.  And this being my first attempt at anything N scale, I was not anticipating a quick build.

I like to get ideas for all my modelling from the prototype.  I am fortunate to live close by the loop, although I really do not have enough images to do it justice.

As before, I will let my in progress pictures do the talking 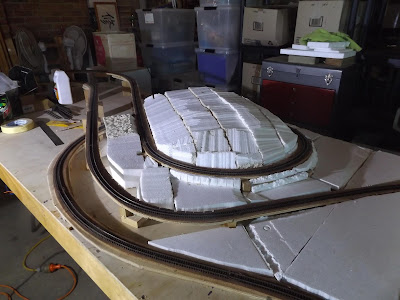 Next steps are to repeat this process on the rest of the layout.

Things have been a bit slower than I hoped on the Bethungra N scale layout rebuild, but progress has been steady.

Track laying continued, final wire jumpers installed, and I soon had a continuous run.  Then I cleaned the rail head.    I try and avoid using bright boy, peco track cleaning blocks or other abrasives.  These have their place, but only to remove visible corrosion.  For the most part, I use a wooden block, normally a pinewood offcut, and polish the rail head.  It does take extra time, but doesn’t introduce micro-scratching of the rail, which can give later dirt build up on the rail a convenient place to stick.
Testing in the semi-dark, with a headlight equipped loco will give an indication of where the cleaning needs to be redone, as the loco headlight will flicker at those spots.

Testing a train.
My test train was allowed to circulate around the layout.  After 4 successful laps, the test loco decided to partially derail on the approach to the bridge.  There was no obvious kink in the track at that point, but I did find the track on the curve had a slight negative camber (think superelevation, but instead of the lean to the inside of the curve, it was to the outside).  Problem possibly caused by reusing S/H track?  After a bit of adjustment, and packing the outside rail, the derailments at this point seems to have been solved.

Track painting
Once I was happy with the track, I spray painted the track with thinned ‘Floquil Roof Brown’.  This spray takes the shine off the sides of the rail, and dulls down the plastic look of the sleepers.  The track railhead is again cleaned, ideally less than 30 minutes after spraying - before the Floquil paint properly cures.

The Museum items
Before I start on the scenery, I wanted to test the trains from the museum.  Last week,  Bob from the Broadway Museum dropped off the locos,  carriages, powerpack and scenery items.  He also provided some other locos for me to test.

Locos and rolling stock.
The museum owned a NSW 45 class, and an American GP38.  Both had micro train couplers.  There were only 4 australian freight cars (again with micro train couplers), and a number of NSW look-a-like passenger cars with Rapido couplers.
The Atlas GP38 loco ran sweetly, and attaching the 4 freight wagons, hauled them up around the layout with no problems.  The NSW 45 also was a quiet and smooth, but tended to slow down, and stall a few times.  Recleaning the track didn’t fix the issue.
The passenger carriages were from Kato and Bachmann.  They ran well behind my original test loco which also had rapido couplers

A “new” loco joins the fleet.
At the Wagga Wagga model train exhibition last weekend, I mentioned the 45 class issue with Peter Dinham, a member of the Canberra Monaro N scale group.  Peter not only gave me some good advice, he also donated  a loco -  a Commonweath Railways GM class.  Peter was aware of the original “Bethungra Loop” layout in the Broadway museum, and this was his way to assist its rebuilding.  The GM was surplus to Peter’s requirements, not having been converted to DCC (and unlikely to be), it had not turned a wheel in a long time.

Servicing the 45 class.
On the workbench, I tested the loco.  Electrical power was not being picked up by one side of the leading bogie.  I was able to remove the resin shell from the lifelike chassis.  The cause of the electrical problem was that the phosphor bronze pickup to the leading bogie had been bent, and not making contact with the nib on the bogie.  After correction of the pickup, lubrication, and wheel cleaning, the 45 class now is performing superbly.  After over a dozen runs over the full track, not once has it derailed

Servicing the GM class
Peter’s GM Class loco also had a problem.  It would run erratically,  with surges, and stalls.  Again, on the workbench, I discovered that it too had bogie electrical pickup problems.  Some adjustment of the phosphor bronze wipers, clean out of the old grease, replacement with Labelle oil, wheel cleaning, I am happy to report it is now running much better.  Testing will continue, but so far, so good

The power pack.
The H&M Clipper power pack was in its day, a very desirable unit.  It still performs well, a testament to its construction.  But, in a museum context, the power pack control is awkward.  More on this aspect in a future blog-post.

Next stage is the scenery.   Happy modelling