Oil depot sidings were once quite numerous on NSW railways, and Wagga had its fair share.


From my research, I have found 6 sidings in the Wagga yard area, although I will only have space to model 4 of them – Esso and Shell were on the “Wagga Shunt”, which is off the branch line just over Lake Albert Road, Caltex (the old Texaco) on a siding across Railway Street, and BP, on the Wagga station side of the Docker Street level crossing.

No other depots existed on the Tumbarumba Branch line – which may mean 44 gallon drums in S truck delivery.
There was one more siding that I need to mention, and this was the bulk oil siding at Bomen, which was built to consolidate all the other depots in the Wagga area.  But I won’t be modelling this one, as it was established far too late for my 1970 nominal layout timescale.

A great article on Country Oil Depots by Howard Armstrong was published in issue 10, of Australian Journal of Railway Modelling over 20 years ago.  Whilst I won’t repeat the contents, Howard also included pictures of three of the Wagga oil depots, which fills in gaps in my photographic archive

Bomen is also a bit large in scale from the smaller depots that I plan to model.  Looking a bit wider, Paul Ferguson sent me some photos of some neat depots at Yass, and Orange

Being a former resident in Queanbeyan, I took interest in the two per week oil trains servicing Canberra.   Whilst it isn’t Wagga, I suspect there were many similarities with the design of the depots, and unlike Wagga, where most of the infrastructure disappeared before Google views, the Canberra Fyshwick sidings are mostly still intact 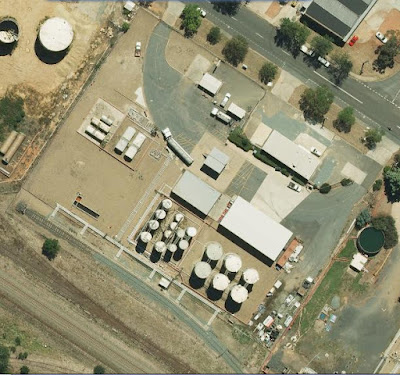 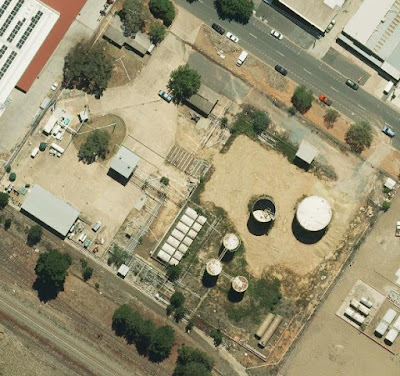 Modelling the depots should be fairly straight forward.  In most cases, there was just a simple siding; a single set of discharge pipes per siding;  a shed; lots of 44 gallon barrels; plus a tank farm nearby.  Chain link fence, gate, and signs.  Pipework is definitely needed too – this is where the recent colour views of the Canberra Depots can help.  A kit that will be very useful to represent the piping, is the Walther’s HO scale Piping Kit

Peter Street in AJRM issue 11 has a great article on modelling an Esso depot, and I will refering to this article when I actually start construction

Both Eureka and SDS have produced excellent bogie oil tanker models, and Austrains have produced a 4 wheel tanker.  These have been reviewed elsewhere.  Older kits do exist, e.g. the former Lloyds range; and there are a number of articles in AJRM and AMRM on converting, and scratch building tank cars

Many years ago, I remember a Bob Gallagher editorial in AMRM magazine asking people to take pictures of the things they see around them, and don’t assume that they will be there forever.  I can do no more than re-emphasise Bob’s comment.  Take pictures of things NOW, and gather information whilst the structures, and people are around.  Record it for prosperity.  When I took my pictures of Wagga oil depots in the early 1980s, I had no idea how important they are to me now.    And they disappeared very quickly.  In retrospect, I should have taken more images, although the cost then, was over 50c a slide, or print, unlike today, where 1000s of shots can be stored digitally inexpensively.

And even online resources, such as Google, are constantly uploading new images, replacing older versions.  The new images may be poorer in resolution than the older ones, OR no longer show structures that have been replaced.