When I was designing my layout based on Wagga Wagga, I was interested in including as many industries as possible.   The track between Docker, and Urana street contained the following possibilities


The showground
A recent article appeared in the November 2019 Australia Railway History magazine, describing the showground siding, and operation.  This siding was well out of use by 1970, and lacking any photographic remains by 1970, I will not be including it

Willis Bricks
A siding was laid for Willis Bricks in the 1930s according to my research.  Willis Bricks was a major brickworks for Wagga, including its own small tramway system.   The 1954 Daily Advertiser photo does not show a siding, so perhaps the earlier information was in error.  In any case, I have not been able to discover if or when they used the railways to  transport their bricks, and whilst modellers licence could be used, I do not plan to include it 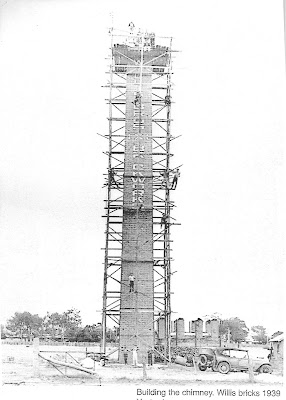 Hardys Timber
A siding was used by Hardys Timber until sometime after 1970s.  There were 2 major sawmills on the Tumbarumba branch:- at Humula, and Tumbarumba that sent cut timber by rail – and I expect that one of the destinations was Hardys.  Having both the sawmills, and the receiving/retail outlet included on the one layout is a significant bonus for operation

Gas Works
A new gasworks was established in 1964, and a point was laid off the Hardys timber siding for an extended siding.  As is common with coal gasworks, there was incoming coal wagons, and one of the byproducts of coal gas production is coke.  The gasworks was being decommissioned when I photographed it in the 1990s, but I did note 3 chutes above the then removed siding – which I assume was for the coke.   The gasworks siding was drawn in 1962s plans with a loop for a loco to run around the coal wagons.  I am not sure if this was done, as my 1970 aerial picture is not clear

LPG Depot
Opposite the gasworks, a large LPG depot was established.  This was prior to 1970.  The LPG depot seems to have its own siding – assuming that the former gasworks loop was not in use.  Most of this is speculative, as whilst I have photos of the depot, the 1970s aerial picture only hints at unloading pipework. But, I am fairly sure it did exist, as in a recent talk at the Epping club, David Lowe reported on the movement of Speed E Gas tankers thru Goulburn, as far as Wagga.

Trucking yards
Wagga Wagga was, and still is,  a major selling centre for sheep, and cattle.  Line side trucking yards were established, and fairly large trains could be handled, and stored on the adjacent sidings.   The saleyard complex in Wagga at the time was on Travers Street, so stock was moved to/from these yards by road.
The movement of sheep and cattle wagons will be a major focus of my model train operation.  I plan to model these trucking yards, as well as stockyards at the Bomen abattoir, and stock loading on the Tumbarumba branch at Borambola, Humula, and Tumbarumba.
New stockyards  were built in Bomen by 1979, and the Wagga stockyards, and trucking yards were removed.

Operation
Whilst it is possible that stock trains could have entered the trucking sidings directly off the mainline, my only picture of a stocktrain in Wagga shows the X203 shunting engine with a number of CW wagons heading towards Docker Street.  I also have pictures of coal wagons in the Wagga sidings.  So, I am going to make assumptions – all trains with wagons for the Docker Street sidings are disassembled in the main Wagga yard, and are moved from there to the Docker street sidings by the X200 shunting engine, avoiding any timetabled mainline trains

Modelling notes.
Wagons.  All the industries I hope to include, have specific wagons.
-        SDS Models have produced the Speed-E-Gas wagon, and I have acquired a small number for the LPG depot.

-        Coal Wagons for the gas works are fairly common.  I made quite a number of  AR Kits coal wagons in the 1980s/90s, and recently acquired some Hi_Rail BCH wagons.

-        Stock trains will be a feature.   I own a small fleet of Eureka,  SDS, and Columba bogie BCW cattle wagons, and a few Eureka BSV bogie sheep vans.  Plus a pack of Austrains 4 CW cattle wagons. In addition, I have also made a number of Casula, and Minimodel kits

-    Timber loads can be placed in S trucks, although I admit, I will have to do more research to find other wagon types used for sawn timber loads.  Photos would be helpful

Baseboards.  The space I have allocated between the two level crossings is around 6 metres long x 600mm wide.  I am hoping that I will be able to include the 4 industries above, although to limit the space, I will be leaving out the Pig stock races, moving the sheep, and cattle races closer to Urana Street, modifing the trackplan, and relocate the LPG depot and gasworks structure so it appears a lot sooner after Hardy’s timber.
=================================

Aerial shots are nice, but the lineside also needs some details.  Tony McIlwain went to the nearby teachers college in Wagga in the 1960s, and has managed to fill in a lot of gaps in my knowledge with infrastructure.  I will leave you with these gems.  Happy modelling