Small details.
I was reminded last night by one of my Blog readers, that it has been a while since my previous Blog entry, and he was after an update.

Backscenes.
Bob, an amateur artist from the Broadway Museum has offered to paint my back scenes.   In the meantime, I added a second  white undercoat to the backboards, and then painted on the blue with a roller.  The shade I chose was Taulbmans “Diamond Blue”, in a 250ml sample pot from Bunnings.  This was not quite enough to cover the entire 4.4 metres of backboard, but the area that I was unable to paint is below the scenery level.  Ideally, the blue should fade out towards the horizon, but my attempts to do this on previous layouts have been less than successful 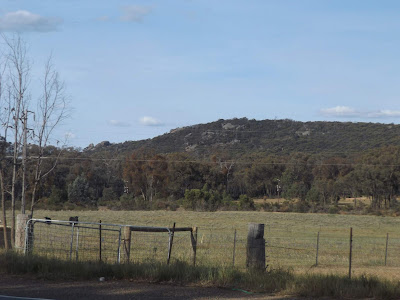 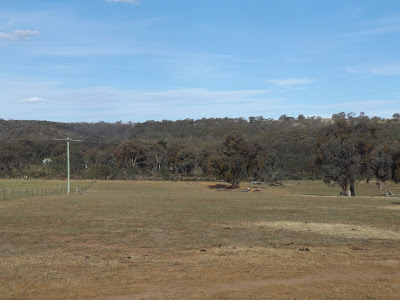 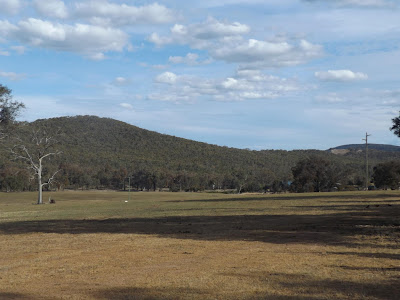 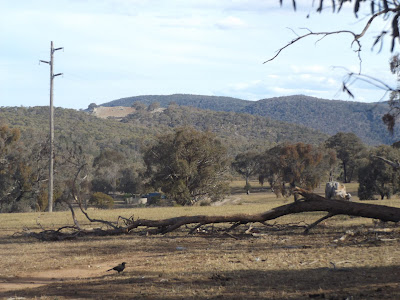 Upper quadrant signal
One of the things that I remember from my train travel from Wagga to Sydney  in the 1960s, was seeing the signal on the upper level of the Bethungra spiral.  I wanted to reproduce this on the layout.  After seeing the upper quadrant signals on the N scale Gunning layout, I made some enquiries as to whether they were a kit.  I was advised that in the absence of a NSW kit, they made the decision to use Ratio parts, and the resultant signal was fragile.
I didn’t think that fragile was something I wanted to build.
The alternative was to cobble something up from brass.  I ordered some brass Eckon N scale ladders from ebay UK.  Postage and GST made them rather expensive.  However, the ladders are a good length, and quite fine in profile.  They are slightly too large, being 2mm:foot -  an acceptable compromise.  The package arrived after a few weeks.  The Greg Edwards data sheet was my guide to height and profile, and my signal is as pictured.
The semaphore arm is crudely cut from brass sheet.  The platform handrail is an extension of the ladder rungs, and simplified.  The platform is styrene.  Greg Edward’s relay hut design differed from the picture I took of the upper quadrant north of Junee, so with Greg’s dimensions for height, and end walls, I scratch built a small relay hut completely out of my styrene scrap bin.
More upper quadrant signals should be visible on the layout – maybe a task for the future.

Boom gates
As I also found no kits for an N scale  NSW boomgates, Greg Edwards data sheets was again consulted.  However I sized my model on some brass washers I had, as I didn’t want to try and cut the flashing light surrounds.  Both boom gates are cut from scrap brass and again, rather crude.
Both the boom gates, and upper quadrant signal are non operational, and still need painting.

Roadway line marking
I had considered using paint, and a bow pen for the line markings, but a chance comment that pencils were used for line marking on the NSW HO Stockinbingal layout, had me heading to Office Works for suitable markers.  As I have backdated the layout with upper quadrants, I also backdated the road, with yellow safety lines, as opposed to the bland white that is currently used in Australia.  The line marking was done by ruler, and freehand – and the line spacings are probably no-where near scale. Unfortunately, the pencil I chose was actually a  pascal, and would rub off (like chalk on a blackboard).  Easy fix with dullcoat I thought, although I think there was a reaction, and the yellow line tended to spread.  The picture above shows this worse than it looks like in person, and I will most likely leave it.

Telegraph line
I was given a eight second-hand N scale poles and whilst these are not NSWGR, they will do for now.  I “weather” them by painting the shiny plastic poles with a dirty turpentine mixture, which kills the shine, and dulls them down.  The insulators are then painted white.   Unfortunately,  I will have to use the poles sparingly, as I don’t have enough

Ballasting.
Ballasting is a task best attacked in small segments.  So far, around 1.5 mtres of track have been ballasted

Trees, and bushes.
This is a work in progress.  I want to get the majority of the ballasting completed before adding the trees, and bushes that may get in the way of the out of scale hands doing the ballasting.  I am trying to make some wirewrapped gum trees, and I hope the results will be good enough for my next blog post

The small details take time.  At what point do I stop?  This is a decision that confronts all layout builders.  I think I will have to run fencing, but roadside signs, and farmhouses may be a step too far.  After all, my long-term aim is to work on my Wagga layout/models.