As anyone who has been reading my blog over the last few months, knows that I have a fascination for NSWGR RUB carriage sets.  So, it should come as no surprise, that I had not one, but two 8 car RUB sets on order from Auscision.   And finally, after what was probably a 3 year wait, they arrived in my PO box this morning. 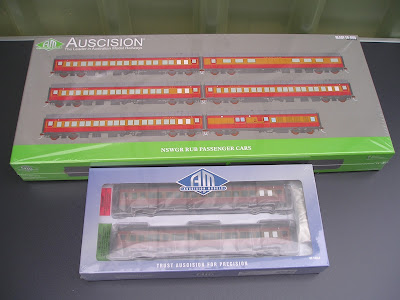 First impressions are a solid box, with nice artwork – as we have come to expect.  Inside, the 6 car set is sturdily secured in plastic.  As I had ordered an 8 car set, the remaining 2 carriages are packed in a separate box.  The sets I ordered were from different eras – the venetian red, and russet  was from their introduction in the 1950s, the Tuscan, and dual chrome band from the 1970s 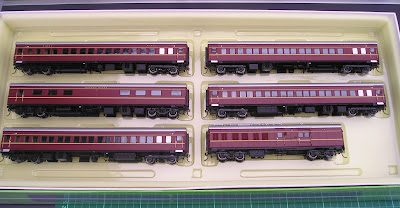 Externally, the carriages have great presence.  The painting is crisp.  Details are everywhere.  Lots of pipework underneath, the ventilators are well executed, the end corridor connections actually move.  Some of the coaches have electrical pickup, which I thought was for internal lighting, however, it is a DCC connection to a 21 pin plug for external marker lamps
The carriages are designed to run on curves 24” (61cm) radius or above.  If your curves are tighter, Auscision have provided replacement kadee couplers with longer shanks to replace the couplers already installed.  A nice touch
I will allow the pictures to do the talking

First class SBS RUB car – Venetian Red and russet.
Something is not right.  The seating in these cars should be 2 + 1, and the saloon should seat 31 passengers.  What is provided is the 1960s rebuild which accommodates 42 passengers in the saloon areas.  The seats should also be green, but the tint colour of the windows makes the interior almost invisible.  What I also found interesting between the SBS cars in the 6 car box, and the 2 car box was the inclusion of the “non smoking” decal on the side of the SBS car in the 2 car box.

Second class SFS RUB car – Venetian Red and Russet
Similar comments on the “non smoking” decal.  The seats are the same as in first class – whilst 42 passengers in the saloon is correct, the seats in 2nd class should be the lower, and harder roll-over type, rather than the swivel, and reclining first class. One of my models had a end step glued at an angle, so maybe a "friday" model?

Buffet/diner RS  -Venetian Red and Russet
The tinting makes it hard to see anything.  An add on plate “Sydney Daylight Express” is provided to add to the outside of the buffet car.

Power Van PHS.
With correct bogies.  My set number is 140 – which is assigned to the Sydney-Albury route – through Wagga.

First class SBS RUB car – Tuscan Red and 2 chrome bands.
With a clear window, one can really appreciate the detail on the inside.  Whilst the 2 + 1 seating was retained for the Intercapital Daylight, 2 + 2 seating in the models is correct for the other day trains.  Once again, we have the “non smoking” decal for the 2 car add-on box - although my picture of a real RUB car of this design says "No Smoking" (see my earlier RUB blog post for the picture).  Of extra interest is the change of bogies – the original with 2AN style with the later 2CA.  The interior is moulded in a colour that closely approximates the rich veneer of the prototype. The carriage position numbers are simulated "slip in" card style, rather than the permanent decal number of the earlier Venetian Red and Russett period.  Please note that the windows are clear, not cloudy as the picture unfortunately shows

Second class SFS RUB car – Tuscan Red and 2 chrome bands
Apart from the wrong seat style, the interior is crying out for passengers.  Externally, note the different bogie style,   no “second” or “economy” decals, and the “non smoking” decal only on the extra 2 car add-on set.  I am disappointed that Auscision did not provide “second” and “economy” decals for the purchaser to apply.

RS Buffet diner. Tuscan Red with 2 chrome bands
WOW.  The interior is moulded in grey plastic, seats are correct, and some of the hotplates, and urns are molded-in ready to go.  Certainly this carriage needs to be superdetailed.  Food warmers, hostesses, detail painting, and hungry hordes  of passengers.  My memories of this car were the toasted ham and cheese sandwiches, and soft serve ice cream in a paper bucket with wooden paddle as the spoon.  Absolutely outstanding model 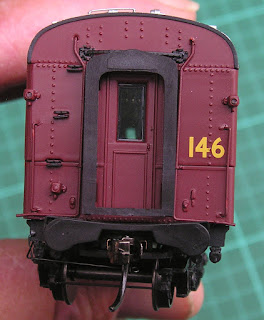 PHS Power Van
Set 146 is not an intercapital daylight set, but one had to choose from the available sets offered.  The number may be easy to rework.  I believe the marker lamps are operable

Unless you set out to model a specific train, it is difficult to get everything right.  Notwithstanding my negative comments on this quick review, I am thrilled that after a very long wait, the models have arrived.  For those wanting different RUB cars (such as the OFS) then I suspect that like the prototype, these cars can be kit bashed.   Please refer to Volume 2, of “Coaching Stock of the NSW Railways” for the variations.  Unfortunately, due to a lack of layout, I am unable to run these carriages at the moment.  I await to see a more informed review in the pages of AMRM: if they can devote 2 pages recently on a review of an obscure ballast plough kit, then no less than 10 pages of review will do these models justice.