I have always thought that a model kit is like a scratch build – with most of the hard work done for you.

The Station Masters Residence at Ladysmith is located besides the tracks, halfway between the silos, and the station.  It is (or was) a standard NSW J2 design, although it has changed over the years, with additions.   I had a choice – scratch build, or find a Stephen Johnson Models kit.
The SJM model has been out of production for many years, and none have appeared on ebay to my knowledge.  But could any kits be left unsold?  Knowing that Andrew Ottaway was re-introducing some of his father’s kits, I sent an enquiry email to Andrew asking if there were any kits left in the inventory.  The response was encouraging, and Andrew indicated that he would be able to cast me a “new” kit.
After a  2 month wait, I received a paypal invoice, and the kit arrived shortly thereafter.

The kit consists of many resin parts, balsa for the roof, dowel for the wood stumps, corrugated metal for the roof, clear plastic and a set of etch brass for the windows.  The instructions were concise, making the assumption that the purchaser has some modelling skills.  (This kit is not suitable for beginners)

I was planning to construct the kit straight out of the box, however, I didn’t like the way the walls fitted together, with no floor to lock the corners into a solid box.  (The kit relies on the roof to do this).  The wooden dowels are also to be cut into small cylinders to provide the stumps that the prototype uses to support the main structure.   Anyway, to cut a long story short, I re-engineered my kit for a styrene floor, and brickwork for the foundations.   I understand that this is not correct for the prototype, but it is a compromise I can live with.
The front porch is also installed low to avoid having to make those stumps. 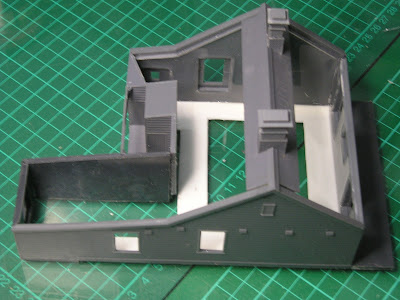 After assembly, I then spray painted the model with a grey undercoat, and then pale yellow walls.  Detail painting for the doors, and trim was next, followed by installation of the assembled windows.  I am afraid my painting of the doors is clumsy, and lacks finesse, so I hope people do not look too closely.

Windows were next.  Clean up the brass, and I used a vinegar bath to add an extra key for the paint.  The I sprayed some adhesive onto cardboard, whilst adding the grey primer, and later the white.  The clear styrene was then added to the rear.   Getting the windows in square - particularly the small ones at the back was a bit of a hit-n-miss.

Now came the big experiment.  Rather than use the corrugated metal provided, I thought I would make up some individual sheets using the Brunel Models Corrugated iron sheet maker with some aluminium tray foil.  I will let the viewer make up their own mind on the effectiveness of this technique.  From my viewpoint, whilst the individual sheets look, and feel amazing, they are too thick to be layered in this fashion on the model.  Plus the individual sheets took a long time to make.  Had I used say, thick cooking foil, then they would have layered better, although they are prone to damage by handling.   In  future, I will probably stick to corrugated styrene, although maybe I should have just used the foil provided in the kit?
(Roof has been brush painted with Tamiya flat aluminium, with some rust powders for weathering)

The front railings were next to be fitted.  Cleanup of these railings took considerable time to remove all the “flash”.  They are also not quite correct for Ladysmith.  I added a piece of styrene on top of the uprights to extend to the roof, as I had installed my porch slightly lower than the kit’s maker intended.

The last items to be added were the eves,  kitchen chimney, and guttering.  The chimney provided is unfortunately, too big for Ladysmith, but I was not going to build a replacement – the model is already compromised, and one more isn’t a major prolem, particularly as the ,main viewing angle will be side on where the width is not seen.  What was more of an irritation, was that one has to cut a “hole” into the corrugated iron roofing material, and try and shape the base of the chimney so it would stand vertical.   But no matter how many times you look at these things, it was a camera that spotted the lean after the glue had set.
Until I get the model onto the layout, I will leave off the small steps, guttering, water tanks, and window awnings.  Fitting lights might be an option too if I install an interior on one of two of the rooms. 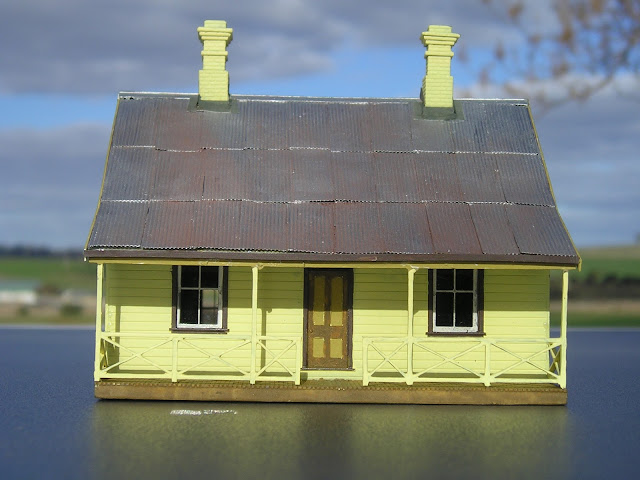