The Bethungra Loop, is a railway deviation, built in the 1940s, to ease the gradient up Bethungra Hill, and eliminate the need for banking engines.  The loop is located within Junee Shire.  The Broadway Museum in Junee contains historical items associated with the town, and shire, so it was not unexpected, that Junee, being a railway town, would have a number of railway exhibits.  One of them was a layout depicting the Bethungra loop. 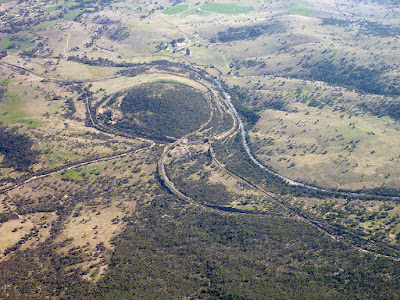 Many years ago, the guys from the Canberra-Monaro N scale group advised me of this layout.   They challenged me to rebuild it.


The layout was an attempt to portray the Bethungra Loop in N scale.  The layout was permanently installed in a room within the Museum.  The trackplan was not a bad representation of the loop, and the scenery could be described as sweeping.  Unfortunately, the builder of the layout had passed away before completion, and coupled with very poor benchwork and tracklaying, the layout was non operational.  The scenery was also incomplete. 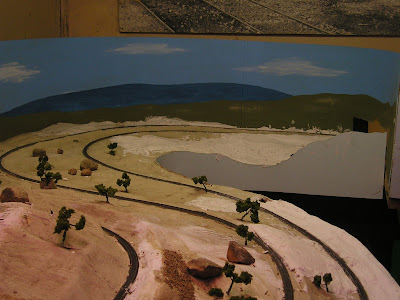 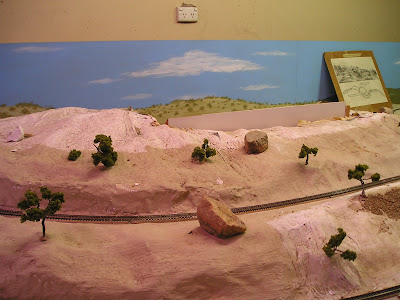 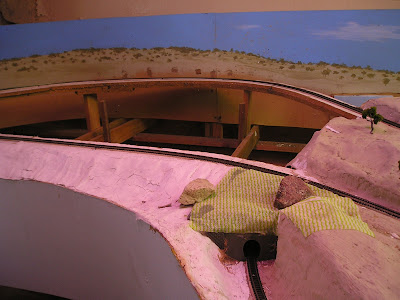 There was another problem.  The room it was located in needed a lot of work – there was a water leak, plaster was cracking, and falling off, the floor boards were loose.

Anyway, to cut a long story short, the museum eventually decided that the layout could not be saved, whilst the room was repaired.  The layout  was dismantled.  Some of the track was recovered, along with the trees, but most ended up as landfill.    Once the room was ready, a number of small display cases, displaying railway items, were installed.  A space was left for a small replacement layout, again of Bethungra Loop, but the replacement layout also proved unsatisfactory.
My standing offer to assist was accepted.
The replacement layout was moved to my garage, and is now taking up residence in my future train space

Inspection
As there was no scenery, the inspection was straight forward.  In short, the gradients were too steep, some of the curves too tight,  the loop didn’t look right, electrics poor, and the trackwork marginal, with kinks, and some fishplates not seated correctly.

I discussed my plans with Bob from the Broadway Museum, and he confirmed the problems, and accepted that an extension was needed to better depict the loop.  Bob also said that they should be able to rework the display cabinets within the Museum to accommodate the slightly increased size of layout.  Bob also handed me some of the N scale track that had been on the original layout – track pins still attached.

Reusing track.
Track that had been used before, is not something that is desirable for an exhibition layout, and certainly not generally suitable for a layout in a museum context.  But I did not have a budget from the museum to purchase new track, and I certainly did not have enough N scale track in my own accumulations.
After removing all the track pins from the flex track, I examined each section closely . Things to look for
1)      Kinks – vertical and horizontal
2)      Sleepers that had been pulled off the bottom of the rail
3)      Corrosion of the rail
4)      Sleepers that had become brittle, or were distorted
5)      Brand of track.
In many cases it was possible to snip off the offending pieces of plastic sleeper base, and slide the remaining sleepers  to cover the gap.  Serious kinks and corrosion of the rail were cut out and discarded, leaving 2 shorter lengths of flex track.  I also discovered 2 different types of Peco N scale, and a number of lengths of Atlas in use.   Ideally, best not to mix-n-match track types.

Stage 1. Gradient
The first step was to fix the gradient problem.  The trackbed, and supports had been nailgunned to the plywood base, which was not ideal.  Each trackbed section had been  buttjoined to the next on top of the vertical supports – introducing vertical kinks in the track.  This is not something that I wanted to repeat.   It wasn’t all bad.  The  geometry of the spiral was OK (the curves were a bit tight, but I was assured the train got around the spiral’s curves OK), and the “down track” grade was a consistent 3%, so I was able to retain some of the original layout


The track on all except the “down track” was pulled up, followed by the plywood roadbed. The uprights were extracted with a hammer. The uprights cannot be reused as they were full of nail gun nails
Additional plywood pieces were cut for a longer ramp for the “up track”.  These and the original plywood sections were joined together to form a single piece of roadbed.
Fitting new supports enabled a rising grade of 2 to 2.6% for the “up track”, allowing a 4cm vertical height gain for the spiral.  This doesn’t allow me to have the prototype’s deep cutting between the 2 tunnels, but compromises have to be made.

Stage 2. Cork
3mm thick cork was glued to the new trackbed pieces, and all the cork was then sanded smooth.

Stage 3.  Track restored to the spiral
When I pulled up the track from the spiral, I had hoped that the pieces could be reinstalled on the updated roadbed. This proved to be problematic, as many of the flex track joins were on sharp curves, and I could not get rid of the inevitable kink at the join.  So new sections of flex track were cut and positioned to avoid joins on sharp curves.    And before one asks, I am aware of the technique of soldering rails together using rail joiners before bending.  It is a silly thing to do if you cannot climate control your layout room, as expansion of rail in the heat, and contraction in the cold requires gaps at the rail joiners. A lesson learnt from experience 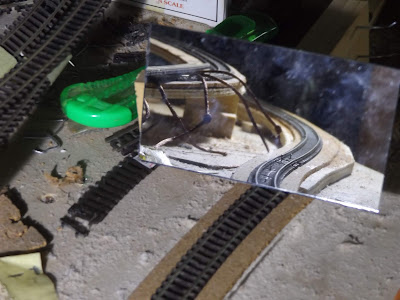 Stage 4. Electrical considerations.
The layout will operate as an oval, with only one train running in one direction.  Fairly simple electrics, but do not rely on rail joiners for carrying the current.  Every section of rail should have its own connection to the power bus.  I find working under layouts anything but pleasant, so I soldered jumper wires to the ends of all flex track pieces.  Yes, it may not be visually the best, but  once the track is painted, and ballasted, the brown multistrand wire will almost disappear.  To carry the power to the extension, a plug and socket is planned

Stage 5. The bridge benchwork and extension
On the prototype, the “up track”, after negotiating the spiral, is on the "down" side.  To get it to the correct side, it crosses over the” down track” on a deck plate girder bridge.   (see the aerial view and map at the start of this blogpost)  This aspect was missing from the layout I received, but in my opinion, had to be installed.  Re-installation also forces the extension of the layout onto new benchwork.   Unfortunately, I did not have enough real estate on the original benchwork to maintain the 3% falling grade of the “down track”, and another compromise, was to flatten, and then dip the “down track” under the “up track”.  A further compromise is that the below track plate bridge will need to be changed to a through plate girder.   Once the tracks cross, the “up track” will descend downwards, whist the “down track” will go back up, both tracks reaching the same level on the new benchwork. 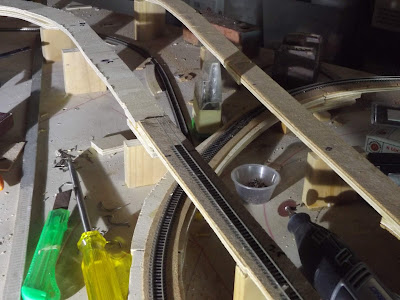 My hope is that the scenery will mask these grade changes, but this is something for the future.
At the time of writing, the roadbed of the down track is not yet secured to risers.

Stage 6. The new benchwork track plan
As previously mentioned, both the up and the down tracks will resume their side-by side posture on the new benchwork.  At that spot, my hope is that the Olympic Way level crossing can be modelled.  I think it is important that people visiting the museum  can place themselves in the scene, as many would have crossed that level crossing on their trip to Junee.  After the level crossing, a balloon loop is planned.  The balloon loop will be left as raw benchwork, and not sceniced, as it is not part of the Bethungra Loop scene.
I settled on 27cm radius, as this was almost the same as the peco set track #2 radius pieces I had, approximated the now sharpest curve on the spiral. Fortunately, it was also about the maximum that I could fit on my extension benchwork

Next time.  Connecting the new benchwork to the old, track testing, track painting, and scenery starts

Whilst many would consider working on an N scale layout, not of Wagga, is a delaying exercise, I am using it as a welcome distraction. Not only am I getting back into actually building something, I am also trying out some ideas that may or may not  get used during the benchwork phase of the Wagga layout.  And as I am scheduled to attend the Canberra “N Scale” convention this October (10th-13th),  the timing is probably just right.