In today’s society, when something breaks, then you expected to buy a new replacement.    Apparently this keeps the wheels of commerce alive and well. In short, there is the gathering of raw materials, employs people (or robots) in factories making the product and supplying the boxes, provides work for transport companies, then there is the markup from the retailers.  As a consumer, I end up with a new item.  The old thing and packaging gets thrown away, and this allows the politicians to talk about the perils of landfill, and the benefits of recycling.  In short everyone wins, although I am sure you would rather spend your money on a new train.....
However, those who build model railways often have to be resourceful, and often will come up with work-arounds, and fixes.  This  blog post is all about repairing two of my workshop tools.

Rotary tool
I have owned the Ryobi rotary for a long time.  It works just like a Dremel, and the flexible power cord, and ergonomics fitted my hand nicely. 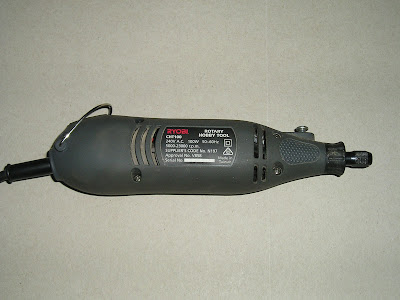 2 months ago, the drill bit was stalling, despite the motor still  turning.  The fault was the nylon coupling between the motor shaft, and the drill shaft had started to crumble, allowing a slip between the two sections.

My repair is as pictured.  I  wrapped what remained of the coupling in a brass ring, and 2 part epoxy glued on some wooden, and plastic parts to fill in the gaps, and remake the large slot for the drill shaft.  So far, touch wood, my repair on the rotary drill is still working.

Desk lamp
Whilst I was finishing off the Bomen SM residence, my trusty laboratory desk lamp had a failure of the support arm, and would no longer hold itself above the workspace.  I was able to finish the model using another lamp, it was nowhere as convenient or good as the Laboratory desk lamp.

I have owned the desk lamp for around 25 years, and have grown rather fond of it during construction of many hundreds of models.  The large magnifying glass,  besides being optically perfect, gives great eye protection.  The lamp cost me around $250 .  Sure the round 22Watt fluorescent does need occasional replacement, but the light is good.
So, rather than head out to the nearest Jaycar for a new LED desk lamp, I thought I would have a go at a repair.
The part that failed was the hole “bearing” at the end of  the square tube that pivots the whole arm vertically. I suspect  that the hole drilled in the tube failed due to metal fatigue.  There is certainly a fair bit of stress on that joint.  Unfortunately,  this metal tube also contains the power cord for the fluorescent, so it was not easily replaced.    The other option was to add external support, and this is what I did.

First thing was finding a suitable piece of metal tube, and then modifying it to fit over the failed tube.  Steve up at Harden uses this tube for construction of 7.25” gauge models, and I was able to obtain a small offcut from him.  After around an hour of cutting and  filing, I had a “C” channel part that fitted snuggly.

I then unhooked the metal springs off the support bracket

Note in the previous picture, the small plastic part that has stayed connected to the pivot bolt. I glued this part back into position within the tube.

I then drilled out a series of holes in the metal “C” channel.  The main 3mm diameter one was the new pivot hole, the others (2mm diameter) were to enable a later plug to create a mechanical connection with the lamp’s support tube. 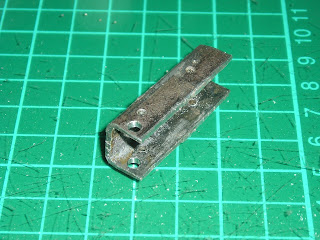 After allowing the whole thing to dry overnight, I then carefully drilled out the 2 mm holes through into the metal tube.  The danger was to control the depth of the drill, so as not to drill into the power cord.  Once satisfied, I glued  the worn 2mm drill bits into the hole.  Once dried, then I used the cutoff disk to make neat.

Until next time.  Build a model (or two)