The Bomen station was originally built by Charles Hardy of Wagga, as part of the establishment of the terminus of the Main south line into North Wagga Wagga.  Charles was the owner of a steam powered brickworks in Wagga Wagga, and he also built the Station masters residence, the engine-shed, and other infrastructure.


According to notes I found at the Junee Roundhouse museum, the plans Charles used were his own
This is a round-a-bout way of saying that it was unlikely that a model kit would ever be offered of this station.

After I drew up the Bomen Station plans, I worked on other projects whilst sourcing the styrene parts I would need.

The first step was to make up a mockup out of cardboard.  This was mainly to test the roof profile, as my plans were not as accurate as they should have been.  Making a cardboard building is a useful exercise, for it also gets me thinking about the project, and tests out a possible construction sequence.   A better grade of cardboard would have been better than the cereal packet card I used,  and perhaps glueing on a copy of my plans front and side elevations would have given a nicer visual result

The brickwork I found is not that close to the modified English bond that is on the prototype.  The brick styrene used is flemish bond, a sheet from the Slaters range.   Whilst this is a British company, and one would expect the brickwork to be OO scale and large for HO, in reality, the brick size was actually about right for the HO scale Bomen station.  But, all jokes aside, it should work OK, as only the best nit picker will know......

Cutting out the windows and doors is a task that took me over 2 weeks, whilst other priorities took hold.  I have kept the cutouts for possible use for the chimneys.  I have only one sheet of the slaters brickwork, and the Bomen station toilet and lamp room building is another that has to be made, so being frugal with the material is important.
The wall edges were then sanded to a 45 degree angle, which should minimise the gap when the wall sections are glued together.  As with everything, resist the temptation to rush to assemble, until all the preparation is done.
All of the windows, and many of the doors will have an arched corbel cap, and a distinctive brick pattern.  This work is best done whilst the wall sections are “flat”.  Then will come the fiddly task of fabricating the windows, and doors.  This will be the subject of the next blog post on the station construction.

Part of my delay in starting the build of Bomen, was that I am continuing to tidy up the back half of the garage, in preparation for the construction of the future train room.   As a bonus,  I found my January –March 1989 copies of the ARHS Bulletin.  Rod S, over in Wagga mentioned to me about an article written by R Scrymgeour concerning the Tumbarumba branch Line, and in the 29 years since publication, I had forgotten its existence.  The article complemented the information and photographs I already had.    I have now placed  all the pages from the article into an A4 display book for easy reference.    There is a reason why old magazines get kept. 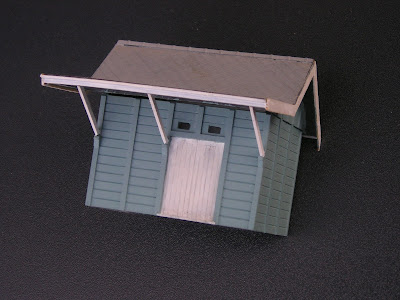 I also  rediscovered a few of my models constructed in the 1980s for an earlier home layout.  Two of these have a chance to be reused.  The station is a “Rails North” resin kit, being the standard NSW PC1 design – used on the Tumbarumba line beyond Humula.  The light blue is roughly the same colour as I remember of Rosewood station.  Whilst I do not have space for a full Rosewood station, I might be able to fit in a token platform between Humula and Tumbarumba.  The other model is a model of the bridge over the railway line in the ACT just west of Queanbeyan station.  I discovered a picture of a similar bridge carrying the Humula Road over the Tumbarumba line near Rosewood.

Until next time.  Stay warm, and build a model or two.
Posted by Rob Nesbitt at 15:29