I was at Macca’s recently, and he showed me one of the Stuart Walker kits that he was building.  It was the Bungendore Station Masters Cottage, but it bore an uncanny resemblance to the Station Masters residence at Bomen.  Initial glance was it was mirror imaged, but everything looked to be there.

I have always tried where possible to support small cottage (sorry about the pun)  industries, and having had success with previous models in Stuart’s  range, notably the G2 Goods shed, and A4 station building, I fired an order off to Stuart’s website
https://modeltrainbuildings.com.au/
On the “buyer instruction” area of the order, I said that I was planning to mirror image the building, to better fit Bomen.

Well, I was surprised around 30 minutes later with a phone call from Stuart, advising that he had been asked for a mirror image kit previously, and had a mirror image file available.  If I wanted a mirror image kit, then he would burn one specially for me, and get it in the post that day .  That sounded like a winner.
The kit arrived express post in Junee the following day.

It was then I had a good look at my pictures of Bomen Station SM residence, and compared it with the kit. 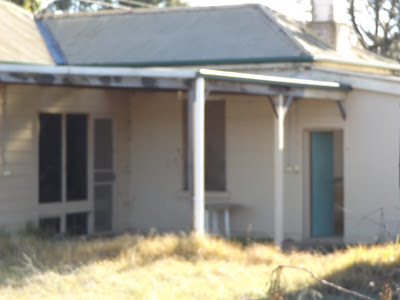 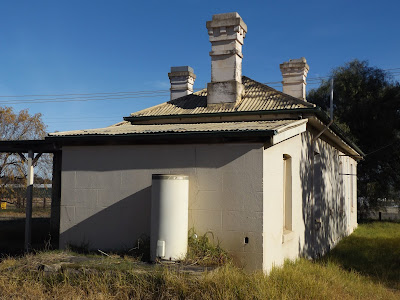 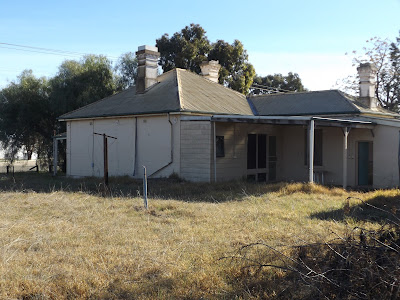 In summary, the differences noted.
1)      The Bomen cottage had been cement rendered over the brickwork.  Unsure when this happened, but I will have to assume it was after 1970. Bad luck if not
2)      There are MORE windows on the long side wall.  And one window (that appeared in Stuart’s kit has been bricked up.   One of the new windows is a larger size, than the others.
3)      There are NO windows on the shorter side wall – nor any evidence of these being bricked up, so my assumption is that they were never installed
4)      The rear patio is  weatherboard, and not brick.  The current roof extension looks too recent, so I won't be modelling this
5)      There is no door on the far rear wall of the real cottage – the door to this space is approximately where the kit has a window.
6)      The chimney castings are a lot plainer than Bomen, and I will most likely need to fabricate replacements
In addition to the walls, Stuart’s kit has included a lot more windows than is needed.  A nice bonus

The next stage was to cut out new window, and door  openings, and fill in those windows and doors that do not match Bomen.  I was lucky in that the brickwork that I was cutting out of the walls, was about the same size and number as what was needed to fill the other openings.   The process though is at best tedious.
After marking out the new window openings, and lightly cutting with a SHARP #11 blade, I use a small 0.4mm drill to drill through the thin plywood, to make a mark on the other side.  These marks are the guides for the heavy cutting from behind.

Once you have taken out the brickwork, trim it to fit the window and door openings you want to fill.  Care is needed.  I use a thin putty to fill the gaps, sand, and paint the walls.  Unless you are more careful than me, you will then need to re-scribe the brickwork.     Another coat of paint, and put these to one side.


As Bomen SM residence has a weatherboard patio area, I had to do some other changes.  The kit has brickwork for this area, which is not correct for Bomen.   I found some suitable North Eastern clapboard siding in my scratch building supplies, and cut out an opening for an aluminium window and sliding door – which might have existed in 1970

I painted all the brickwork with Floquil Antique White, which is a pale cream, matching the current colour.   I have no idea if this is correct for the 1970 time period.   The brickwork was than attached to the heavy laser cut board  provided in the kit, new openings made in the heavy board where there are new windows, and the walls fitted into the building base.

The window surrounds are  painted a brown colour – rather than the current white colour.  I used Floquil Rail Brown as my paint.  Attach the window surrounds to the walls with white glue.  The mullions, and window framing was painted white, and attached to the laser cut glazing again with white glue.  I have started to fit  these into the wall  openings

The roof support structure  is assembled as per the kit instructions, although mirrored.. 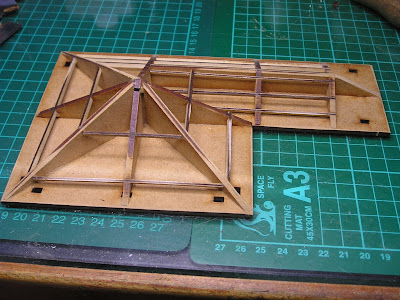 Thin corrugated plywood is supplied for the roof, cut to shape with the laser. .  Unfortunately, the roof supplied in my kit was for the normal kit, and not the reversed one, so some more cutting and splicing was needed.  In retrospect, maybe I should have installed the roof, flatside up, and used corrugated aluminium foil for the roof.    Painted in Floquil Old silver.  The roof can be detached from the walls at this stage.


I added some stained floorboards to the front porch, prior to adding the veranda awning.

Well, that is where I am up to.  I had hoped to have finished the model by now, it has been on the workbench for 3 weeks.  The next steps will be to finish the roof, scratch build the windows, modify the kit chimneys, and write up the Blog post.