A Water tank for Tumbarumba

The water tank at Tumbarumba follows the standard  NSW  20,000 gallon welded design, with timber stand, concrete supports, and a water filling pipe coming directly from the bottom of the tank.  When I was there in 1980, the tank had been out of use for around 10 years, but still essentially complete.  Unfortunately, I only took one photo, so I am indebted to the pictures taken by others. Thank you Peter ('Of Branching Out NSWGR' blog fame) for supplying me some extra photos from his own collection.

Other reference sources were the Greg Edwards Data sheet (L1) , and the Water Tank article in Australian Journal of Model Railways (issue 5)  by Graeme Henderson, and Phil Kelly

The welded tank “kit” was bought from Casula Hobbies at a recent exhibition.  This plastic casting has been available for decades, and shows a number of deficiencies.  The welded pattern at the corners is not complete, the casting is very thick,  and there is no interior detail.   Whilst I am sure that these things could be fixed,  I made the decision to cheat save some time in fabrication of parts, as well as some money.

The plastic castings is designed for the larger 40,000 gallon  tank, so the top half of the castings were cut off with a fine saw, and sanded flat.  I also removed the 7 undersized plastic joists that were cast into the bottom of the tank casting.  Polystyrene glue then fixed the sides, and base together.

I considered making an interior, but as I was already cheating, why not fill it with water?   The tank was brush painted Tamiya German grey, and weathered with my standard rusty coloured powdered pastels

The “water” would be a sheet of clear styrene, painted Tamiya Olive green on one side.  The olive green looks a bit like stagnant water, and something that will disguise the lack of an interior in the tank.  The styrene is installed ”shiny side up” just below the top of the tank.   I am debating whether I should also use “Gloss Medium”, available from artists supply stores to give the surface a bit more depth.  I did this on the “Yendys” exhibition layout to good effect.

The tank stand was next.  I cut out a base of styrene sheet, and made up the concrete plinths out of balsa.  These plinths are slightly undersized compared to the data sheet, but I was using what shapes I had.  The razor blade in the chopper cut the balsa square, and consistently.  After marking up the styrene base, the 16 balsa plinths were glued into position.    Floquil concrete paint then applied.  After drying, a dirt covering covered the base.

The uprights should be 12” scale square timbers (3.5mm).  Well, whilst I had just enough North Eastern strip wood,  I would prefer to use this where one can see the timber, not hidden in the dark underneath the tank..  The alternative was 4mm square balsa, which I bought for $1.49 per 910 mm length (2 lengths were used).   The balsa is 0.5mm too wide, but after distressing with the razor saw to add some wood grain effect, it really isn’t too far off scale.  16  uprights were cut with the chopper tool, and 11 longer lengths for the upper tank joists and beams.  All these were dunked in the staining solution, and then allowed to dry.

I made up 4 sub assemblies, with 4 uprights, and a  beam across the top.  Cross bracing was then cut to size, stained, and glued in place across the uprights.  Once the glue had set, all 4 sub assemblies were attached to the stand, and locked in place with 2 joists.   Again, cross bracing was applied between the various uprights.  The remaining joists were last to be added.

Nut bolt and washer details (Grandt line) were added only to the outside of the tank stand only.   I am sure the size I used is not correct, but I was using what I had.  As readers may have noticed, this project is low cost.

As Tumbarumba’s tank had a water spout connected directly to the tank, this was the next step. I am unaware of any commercial products, so I made up a facsimile out of plastic sprue parts using the data sheet as a guide.

Water pipe inlet pipe, cistern, and ladder were next  to be added.  The ladder was one from a Ratio brand signal kit ( I bought in London in 1985) , but the rest was made up from scrap sprue.  Whilst lacking the fine detail of the correct plumbing joints, I cannot argue with the price.  And I have made a guess at the positioning of the ladder, and input pipe.  None of the photos that I have shows this detail.  Finally the water spout hose was made up from paper, and painted Tamiya “Buff”. 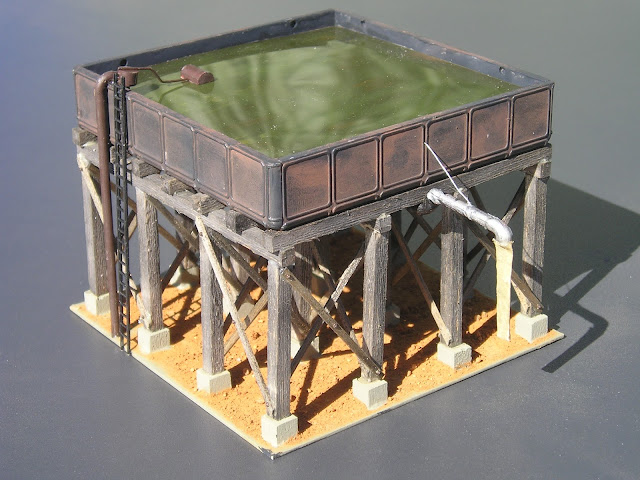 I have 3 more water tanks to make – Humla, Borambola, and Wagga .  They are all slightly different, however, they will have to wait as I have started on two more structures -  station master’s accommodation at Bomen, and Ladysmith