Having spent last weekend at the National "N Scale" convention in Canberra, my progress on Bethungra was slowed.  I had hoped to get all the track down for instance.  Still, the delay in the layout build was fully compensated with inspiration at the Convention.

The Convention may have a focus in N scale, but there were many non scale specific clinic topics, as well as some world class modelling to keep the delegates entertained.  Quite good retail support, with Peter Boorman's Workshops, Pallas Hobbies, and Badger Bits to name a few.  Clinics that I attended included  NSW stock yards, plug casting, weathering USA freight wagons, styrene buildings, lightweight module design and an interesting one from Greg Edwards on some of the background into the color images in the recent "NSW Railways in Colour" book.  The highlight though, for me, and most others was Ross Balderson's Newcastle 1899, which although not yet finished, actually had moving trains


One of the side benefits of the convention, was I was able to purchase 2 x 1KG packets of N scale ballast (Bombo quarry), some will get used on Bethungra.  I even won a  brand new "Micro Trains" USA N scale boxcar as a lucky door prize - although I don't have a loco with the right coupling to immediately test on Bethungra.  Micro Trains (USA) was a major sponsor of the convention.

The next N scale convention is in Sydney in 2021.

Benchwork construction for the extension of Bethungra was a little challenging.  Unlike most exhibition layouts where module sections are bolted together, I needed a rise in elevation of the tracks on the extension.  The tracks would also cross the section boundary not on the flat - one track would have a falling gradient, the other a rising gradient. Anyway, best I illustrate the process with pictures. 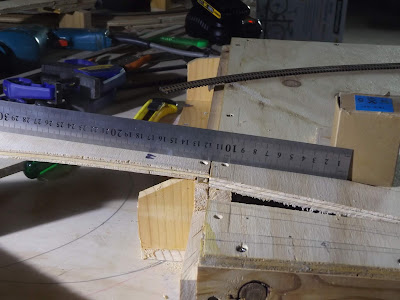 During the convention, I spoke to a few modellers about my excursion into N scale.  Much to my amazement, an article on the original Bethungra Layout in the Broadway Museum had been published in an "N scale Modelling in Australia" magazine a few years ago.  A link to that issue is below.

Until next time.  Happy modelling
Posted by Rob Nesbitt at 15:05