A turntable for Tumbarumba - pt 2


At the finish of the previous blog post, I had installed a hard-disk bearing as the pivot, constructed the shell of a NSW 60 foot table out of brass, made the 60’ track section, and installed the concrete ring rail support

Please note that Step 1, 2 and 3 were done simultaneously.

Testing the table showed up a problem.  The magnets were VERY powerful, and the turntable oscillated whilst eventually achieving, and holding  the alignment.  I thought reduction of the oscillation would be an easy fix by  simply remove one of the magnets, but that threw out the alignment by just under 1mm.  Advice on options to fix from the NMRA guys in Canberra was encouraging, but I will tackle the problem in another way – see later.

There is no easy way to do this.  I painted the ring rail support ring concrete.  I then drew a scale 56’ diameter circle on the ring. I took two sections of rail, and slowly started curving them by hand, steadily reducing the radius of the curve, whilst checking the curve against the drawn 56’ circle.  Once both sides were complete. I cut out the centre curved section of the rail, discarding the harder to bend bits on the ends.  Attachment of 2 Peco insulated joiners to complete the ring. 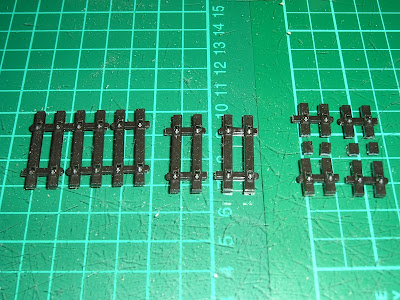 As I had a lot of left over Peco track base, why not use it.  The trackbase was broken down into 2 sleeper sections, and the NSWL chopper made this task easy.  The sections were simply slid back onto the ring rail

step 7 – secure the ring rail to the support 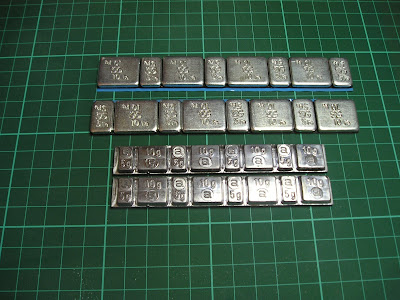 The weight is something I felt would assist in providing some inertia to the turntable, to resist the savage kick that the lightweight table did on encountering the magnets.  Whilst having a loco on top of the table will also add some inertia, more weight was desirable.  After testing I added 15 grams to each side.  Note the 2 different types of car wheel weights.  The more modern type is physically larger, and is also partially magnetic – so my guess is that they have a percentage of weight made of iron.  The older type is not magnetic, and most likely full of lead.  Whilst removing lead out of the environment is a healthy choice, I am going to quarantine my lead weights in models.  The smaller weights fitted into the hollow of the turntable bridge without modification.  Oh, yes, adding weight did help. 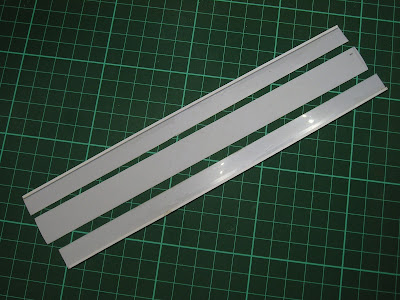 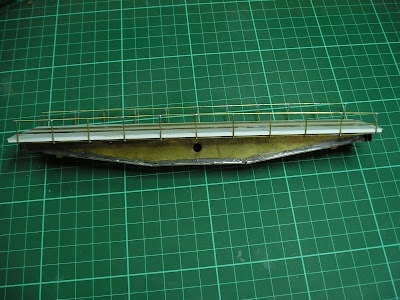 The prototype steel tables have a solid deck plates.  I cut 3 lengths of styrene to fit – and on the edge plates, attached a strip of evergreen 0.060 square strip to hide the PCB sleeper ends  The side plates are glued into position, but the centre plate is secured with blu-tac, as access to the pivot screws may be necessary for maintenance tasks in the future

I used Sculpt-it for this task.  I thought I made a small amount, but I goofed, and had to use the surplus on the outside of the ring rail.  The sloping of the sculpt-it for the pit was also rather dramatic – as I put too much in there too.  Removal of the extra was achieved whilst the sculpt-it was still drying – if I waited until it dried, much more sanding would have been necessary

The abutments were made with balsa, and backed with polystyrene.  I have added some aldi brand filler to the join, and once smoothed will give a bit of a curved surface.

Well, the turntable is now awaiting painting, painting or grassing the pit, fitting the dummy ring rail rollers, and final positioning on the layout.  I will not kid you in saying my turntable  is fully detailed – it isn’t.  But the bigger question is “Will it work?”  A multimeter shows that power gets from the ring rail to the turntable bridge, and turning a loco on the bridge works fine, although the alignment kick did make the tender rock.  That can be minimised by carefully anticipating the kick, and holding the table appropriately.  Running a loco onto the bridge from the entrance road will have to wait for now.  I already know that sound equipped DCC engines will lose their sound, as the turntable ring rail gaps are crossed.  But I don’t think this will be a big issue.  However, the “caution” sign at the end of my previous blog post sort of indicates that people will need some training in its use.

That is enough turntables for now, it is time to move to another project.  Until then, build a model.