One of the regular trains that served Wagga in the 1970 time period was the Intercapital Daylight.  As the name suggests, this train ran daily between Sydney, and Melbourne during daylight hours.  This pair of trains started running in 1962, with the opening of the standard gauge from Albury to Melbourne.  The Train consisted of a loco and a RUB set – steel airconditioned carriages, generally 8 cars in length, but often longer during holiday periods.   Very occassionly, with heavy booking, the railways would run a second division, 30 minutes later than the main train.

The Sydney bound train arrived (if on time) at Wagga at 1:52pm; and the Melbourne bound train at  3:12pm.    I travelled on the Intercapital regularly in the 1960s, and 70s between Wagga and Sydney, and occassionly down to Melbourne – taking note of the scenery, and the disappearance of steam.  Some of the treats from the buffet was the toasted ham and cheese sandwiches, and the soft serve tub ice cream one ate with a wooden “spoon”.   Things like this have made a lasting impression


The train was discontinued in August 1991, when two XPT sets started running between Sydney and Melbourne.  Most of the RUB carriages were sold or scrapped – I remember one carriage actually making its way to Queanbeyan High School, as the senior’s common room.
A full history of the Daylight train service can be found in Chris Banger’s book “Daylight” published by ARHS in 2015

Over the years, I have also acquired some interesting material.  The below images come from my personal collection 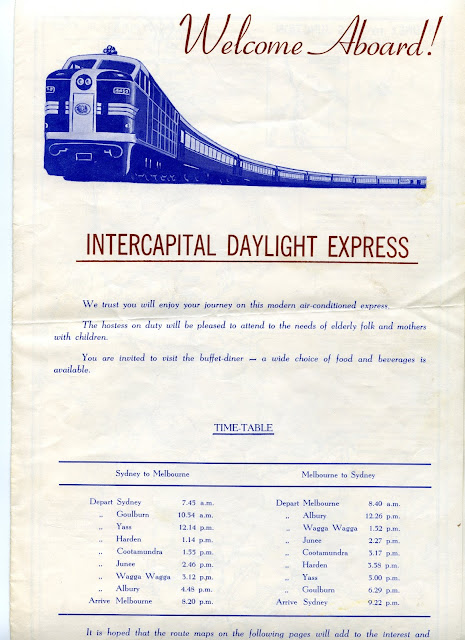 The RUB set has been a favourite of mine.  Over the years, modellers have been blessed with some wonderful kits and models.

1     - Rails North.  Rails North offered a 6 car RUB set kit in resin in the early 1980s.   The windows were real glass, cast into the resin.  I purchased a kit, and sourced bogies, wheels, and bearings.  But my kit remains unbuilt.  I had previously constructed a similar Rails North HUB set, and the weight of the completed HUB set taxed the pulling power of my locos
.

-     -Casula Hobbies, under the Callipari label, produced a set of RUB set carriages in injection moulded plastic in the mid 1980s.  I acquired 6 carriage kits ( two first class, four second class), a buffet, and power van.  These kits included bogies, and wheels.  The kit did not include decals, couplers, or interior.  If one wanted flush windows, Lloyds Model railways had flushglaze packs to fit.  Whilst I was very happy with my assembled RUB set, I did not fit an interior, or superdetail.  The set was quite light, and I had much pleasure in running it at model rail exhibitions in the 1980s/90s.  These kits are still available.  A great set of modelling articles by Peter Jarvis on detailing these cars can be found in the pages of AMRM – issues 241 through 245

3      In 1997, Precision Scale Models announced they were doing a 6 car RUB set in brass, and asked for reservations.   John Sargent (PSM) must have received sufficient interest at $3000 a set, and  Samhongsa (Korea)  were commissioned to build the models – which they did.   The project then has a serious setback, (as I was told) John was shocked at the cost to paint the models – the amount I heard was USD$105 per car.  As the Australian exchange rate was woeful at the time, this represented a cost of about $1200 per set (and more if you also factor in the sales tax, and import duty payable when the completed models arrived in Australia – from memory, these government fees  added about 20% to the cost) .  John was not expecting this extra charge from Samhongsa, and he walked away from the project and had no further dealings with Samhongsa. He lost his sizeable deposit.  The tale does have a good ending, as V&F Models stepped up, and the RUB sets were made available at $5000 a set.  (Ref AMRM December 2001).

4    - Auscision Models are about to introduce the RUB set, in RTR form.  The pilot models look fantastic, and I have two 8 car sets on order.

Short Review of the Brass RUB set
The Brass RUB set is a model that is extremely rare.  In my travels, I have only sighted 2 sets – the first on an exhibition layout around 2002, when the layout visited Canberra, and the second, when I was fortunate to win a set on ebay.  As there has been no review done, I thought it might be interesting to see what the state of the art brass was 20 years ago, a benchmark that the Auscision RUB set models will hopefully exceed.

The set is packaged in a large (possibly too large) sturdy light green cardboard box, with foam inserts.  There is no label on the box.  There are 6 foam openings for the 5 carriages and the power van.  There are 2 first class SBS coaches, 2 second class SFS coaches, one RH buffet, and one PHS power van.
Initial impression of the carriages is that they are nicely painted, lining and decals placement is first class.  Mine had 140 number on the end of the PHS van, and a coach – correct number for an Intercapital Daylight RUB.  The decals for “Syd end” though are missing.  Glazing is flat, reflective, with no distortions seen.  The underframe is nicely detailed, and the bogies are quite fine.  There is an interior in the coaches, and the power van is actually powered.  Non functional, scale metal couplers are attached – fortunately, these can be replaced with Kadees if you operate the coaches.  Weight of each coach is between 270 and 293 grams, and they do not roll well – hence the need for the powered powervan.  The diaphragms on the corridor connections between carriages is solid brass, and doesn’t swivel.  The wheels to me do not look like RP25/88 – the flanges are a bit deeper, with a sharper edge than the rounded RP 25 standard.   I have no layout to run them on, so I do not know if that will cause problems later.
Unfortunately, the interior is in my opinion, poorly done.  Samhongsa have painted all the interiors in a rather bland light brown colour, which neither matches the rich timber veneered varnish walls of the real cars, or the seat colours.  The seats in second class should be a much darker, and the ones in first class should be green.  Whilst the 2+2 bench seating  across in Second class, and the 2+1 arrangement in first is modelled, none of the seats have armrests.   There is no doorway into the dog-box compartment.  The Buffet car interior is sad.  There should be a series of round swivel chairs close to the centre buffet table, allowing people movement behind the seat and the wall of the carriage.  This is not done – in fact, it looks like the seats are attached to the wall of the carriage.  Below the centre bench, there is a series of openings – where on the prototype, this was solid.  There is also no urns, sinks, or equipment on the other bench.    Whilst these things can be fixed by the determined modeller, if I had paid $5000 for the set in 2001, I would have been disappointed.  It is possible that had a pilot model been forwarded to PSM, they would have identified the correct interior paint colours, but I am guessing. 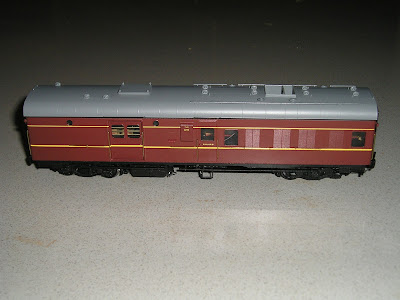 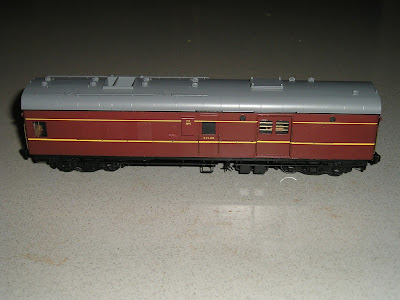 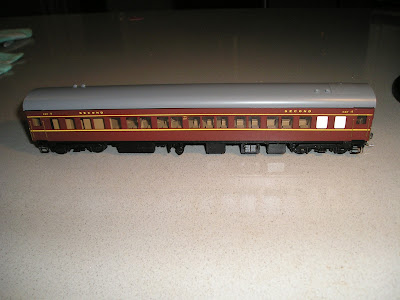 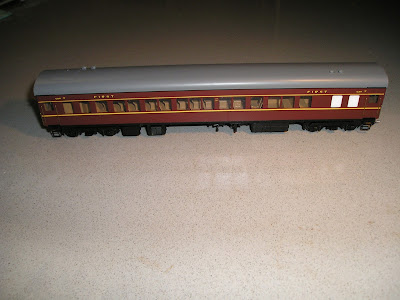 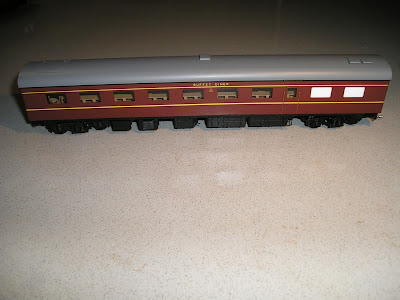 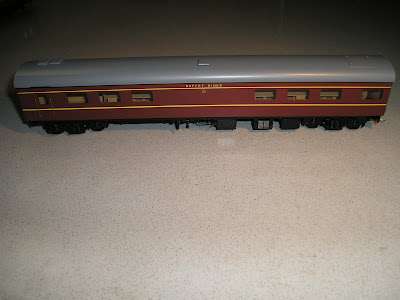 That leaves me with one big unanswered question.  How many sets were made, sold, and where are they hiding?   If any readers have the answer, or even general comments on the sets, I would be grateful if they could post a comment.

I hope to get back into modelling as soon a I clear out the dust in the modelling shed. It has managed to work its way through the smallest of openings, and leave a fine layer over the modelling bench, as well as the floor.