Turning locomotives at the end of the Tumbarumba branchline was performed with a 60' turntable, large enough to take standard goods 2-8-0, C30T 4-6-0, and any C32 4-6-0 that happened to venture that way on tour trains.  It is also turned 48 class diesel electrics, although I just do not know if the CPH railmotors were turned for their favoured #1 end leading.

The turntable is a standard NSWGR 60' steel design, installed around 1921.  Manual operation.  Only one entry track, although the extension through the turntable was the home of the engine shed (actually a carriage shed), hopefully removed before 1970, as I have no space for it.

On the layout, the Tumbarumba turntable is going to be located right on the edge of the benchwork, close to the operator aisle.
A ready to install model of the NSWGR  60 foot turntable is a made-to-order model from Anton’s Trains, and whilst I had already obtained one for Wagga, I had neglected to buy the turntable for Tumbarumba.   Antons turntable is  electrically driven, has multiple track aligning (which could suit a small roundhouse) and a full size pit.    If I was using an Antons turntable for Tumbarumba, the full size pit would have to be modified, as I am sure Tumbarumba only had abutments.

However, I like to challenge my skills, so, instead of buying, I thought I would make a turntable.  If I could emulate the prototype, and have a manual operation, then that would ease construction.

Over the years of not having a layout, I have been thinking about a turntable design, using a PC hard disk drive bearing for the central pivot.  And more recently, I came up with an idea of using rare-earth magnets for the alignment of the bridge with the end abutments.  So after buying a set of button magnets off the internet, I was in a position to start

Thank you should also go to AMRM, who had a plan of the steel 60’ table drawn by Alan Templeman (AMRM Issue 133 way back in August 1985).  The model railway magazine is a brilliant resource, and their on-line search function saves a lot of time. 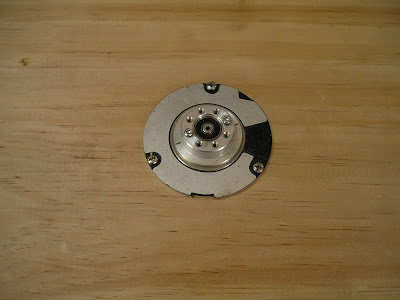 Bearing secured on timber with 3 screws 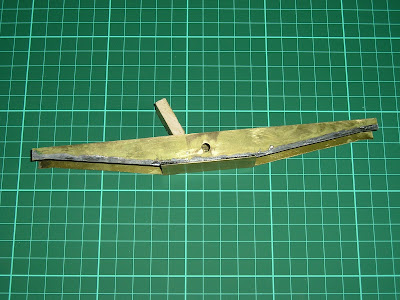 Brass turntable sides cut from scrap brass sheet, and assembled on a base of brass 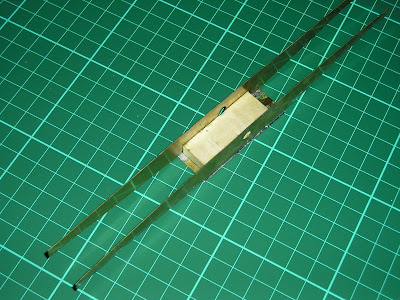 View from above. Note the wooden block used to space the sides, and also maintain the joints being square 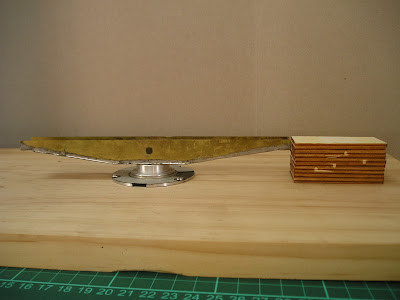 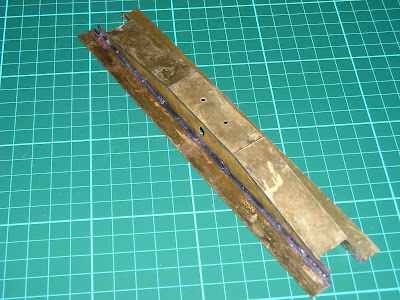 -          Ring and Abutments.
There are probably a lot of ways to construct these, but I chose a method that works for me with the tools, and material I had