Wheat is one of the major crops grown in the Riverina area.   The railway branch line to Tumbarumba was built in part, to assist growers to get their wheat crop to market.  Initially, wheat was bagged, and loaded onto the railway’s S trucks, but in the 1930s, silos were constructed at Ladysmith, and later at Forest Hill.   The Ladysmith silo followed the S008 design, and is the subject of my next model 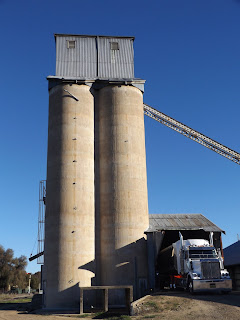 If I was looking for a challenge, I found one in the silo.    A few decades ago, Keiran Ryan wrote a series of excellent articles in Australian Model Railway Magazine AMRM.  (Issues 163 -167, 170 and 240).  These issues are still available, either in print form, or on the AMRM CD).  The S008 silo was chosen by Keiran for a specific blow by blow construction article across issues 165-167.   These editions formed my basic reference, as well as my detail photos taken a few weeks ago.
Way back in the early 1990s, I bought the LJ Models S008 silo kit.   This kit was reviewed in AMRM issue 178.  The LJ models range of kits was very extensive, inexpensive – but they did have a drawback – they were printed cardboard.   In the hands of talented modellers, the flat cardboard could be made into very acceptable models, and substitution of 3 dimensional material (like corrugated iron) over the parts was one of the tricks.    However, having met Keiran displaying his scratch-built silos at a number of model exhibitions, convinced me that I should buy one of his data-packs, which included 4 sheets of styrene, and 4 PVC pipes.  Plus I bought his brass etchwork for some of the detail.   So the LJ Models S008 kit remains unbuilt, whilst I go down the Keiran Ryan silo building path.
Keiran now offers his silo kits in laser cut acrylic form – a significant improvement from the old styrene. Having spent many hours cutting out parts from styrene, I would recommend the later kits for ease of construction. 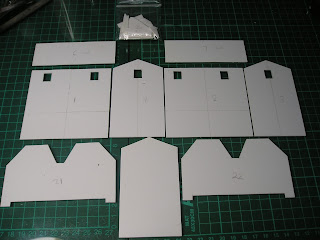 Parts  for the cupola.  (note I screwed up my measuring of the side roof wedge cutout – fortunately I had kept the “discarded” piece, and fixed it further into the build.  Cutting out the windows in 40 thou styrene is a skill I have yet to master
Assembly is straight forward, ensuring that all the walls are square, and taking special note of the bevelled edges of the styrene where the roof fits. 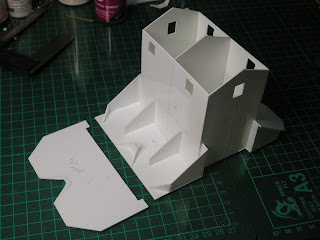 Nearing completion of the basic shape.  I still have the vents/windows to make. 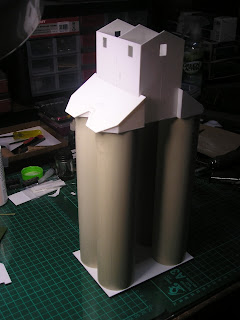 I couldn’t help but place the cupola on the PVC tubes.  Nothing is yet glued.  I still have to make up the central core.


As a foot note, a few years ago, Auscision produced a range of solid resin NSW grain silos – An S008, S016, and S024.  At the time, I failed to buy any, although they quickly sold out.  Then a few years ago, I was offered a boxed Auscision S024 silo, at a price too low to pass.  Whilst the S024 is too big for my purposes, (not to mention very heavy), I am in need of an S016 for Shepards Siding, and the S024 may incur some  drastic surgery to remove one of the side bins.   But this is for the future.  In the meantime, I had a look at my S024, as it might give me some inspiration on my silo build...... 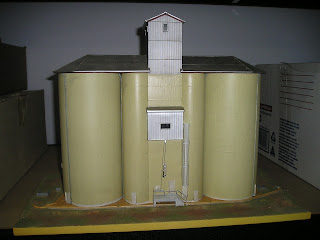 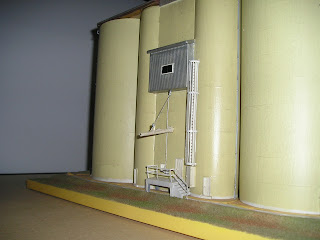 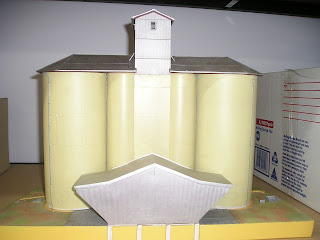 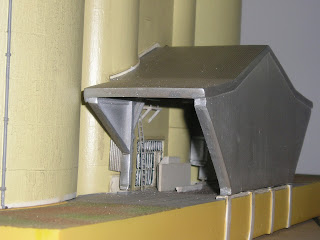