Up the Branch to Ladysmith

If is often stated that adding a branchline to your model railway is an ideal way of increasing the operational interest.

The Tumbarumba branch was constructed in 2 stages - Wagga to Humula - opened in 1917, and Humula to Tumbarumba opened in 1921.  The line traverses mixed farming near Wagga Wagga, but continues into more heavily wooded and hilly terrain the further south east it runs.  Many stations were established, although some fell into disuse well before the line "closed" in 1974, officially due to flooding that washed away the Tarcutta Creek bridge, but mostly due to the NSW government desire to save money, and use any convenient excuse.  Interestingly, the line is not officiially closed, as this requires an act of parliament   Even today, much of the railway is still in place.  The line to Ladysmith lasted a bit longer, due to the wheat silo there, although with repairs on the bridges needed, the last trains ran in 1988.  The RAAF base at Forest Hill then decided to lift the track running near the runway, and the chance of services ever being restored is a pipedream.  A preservation group, Tumba Rail has taken over the lease of Ladysmith station, and used to have Trike Rides for the public, until the rules changed.

Passenger services were generally handled by CPH railmotors on a daily basis.  Goods trains though were general freight, parcels, superphosphate, timber, wheat, livestock, dairy, and fruit in season.  I cannot find any evidence of oil wagons on the branch east of Wagga, which is a shame.  I suspect that oil was transported in barrels in open wagons - and I am searching to find supporting pictures 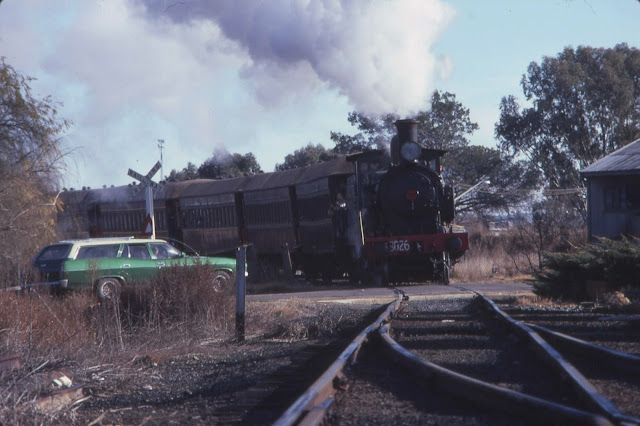 3026 eases around the curve at the eastern end of Wagga station in the early 1980s with a tour train, and about to cross Lake Albert Road.  The siding in the foreground is the Tooheys siding - and has shiny rails 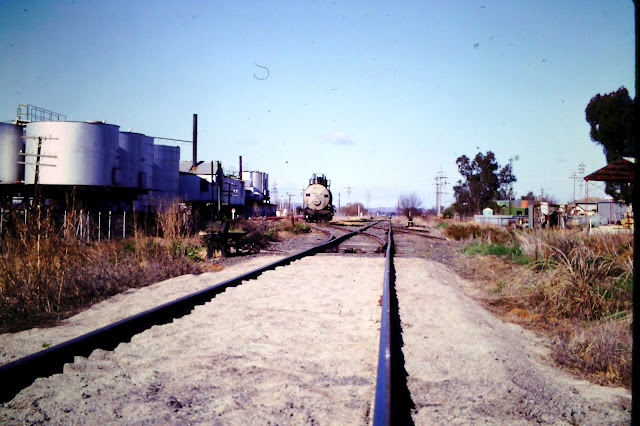 Looking east past the Boral Bitumen siding   The other siding heading off to the right services a small fuel depot (out of view).  I will cover all of these sidings in a future post 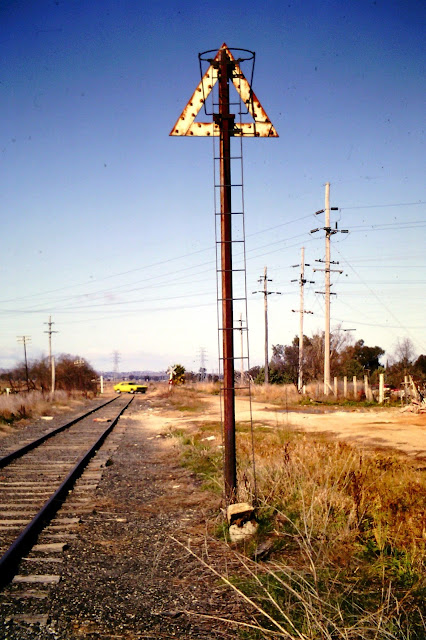 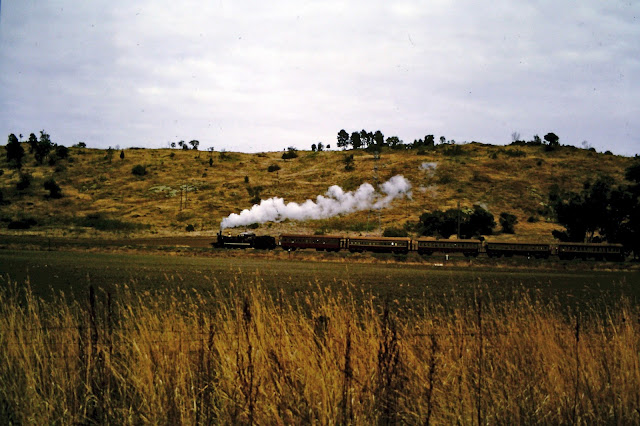 Tour train running on embankment in front of Rocky hill, just beyond the landmark .  Rocky Hill will be used as part of the backscene that will hide the Helix on my model 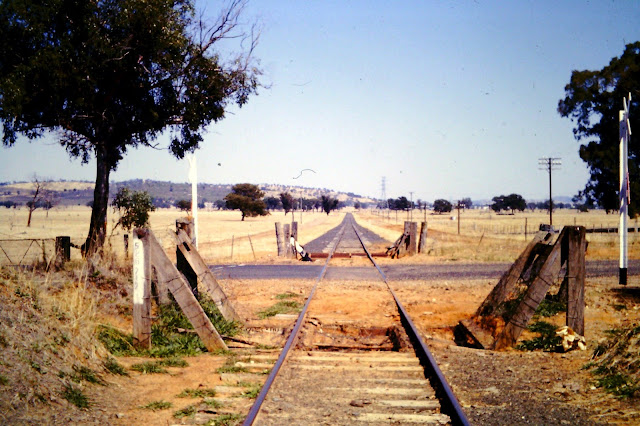 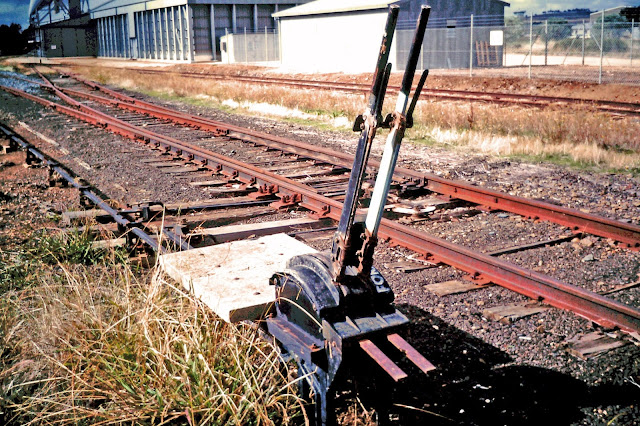 Forest Hill had a station building, platform, and toilets.  All were out of use in 1970, although they were not demolished until after 1975.  The Forest Hill  silos lasted into the 1980s - when they were dismantled.  Interestingly, whilst the station area is now fenced off, the point frame is still there.  I will not be modelling Forest Hill, as from an operational viewpoint, Ladysmith covers this 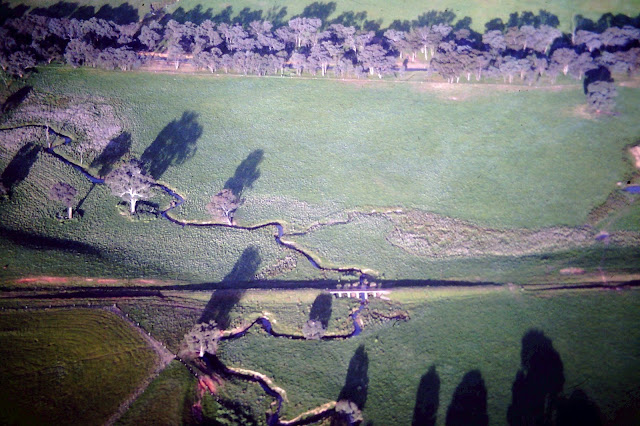 Kyeamba Creek bridge, close to Ladysmith, taken from the light plane before Google maps.  I recently visited the bridge on foot, and trees, wasps, and vegetation make it hard to photograph.  More on the bridge in a future post 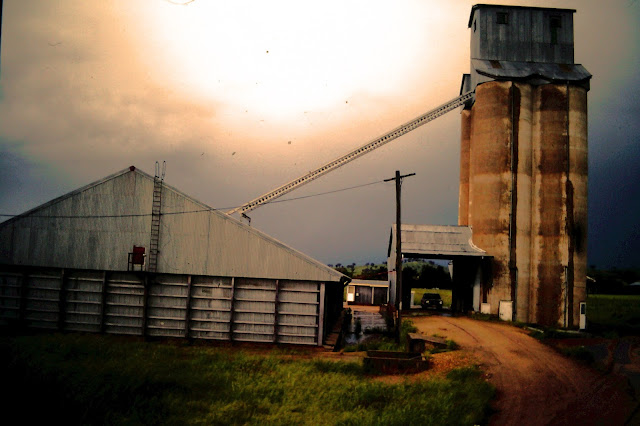 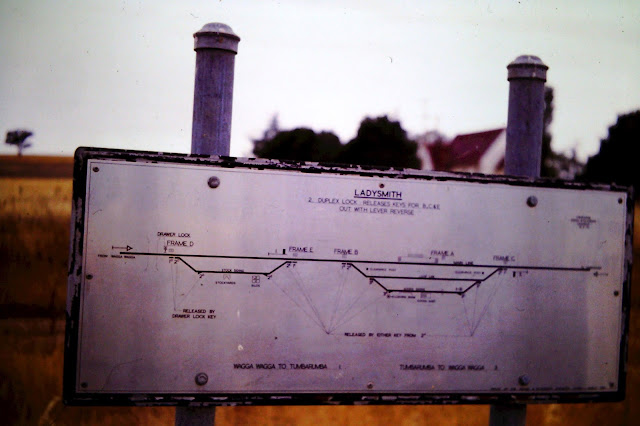 Ladysmith station track diagram - my photo was used by the Tumba Rail guys for a replacement, as the diagram had been removed after the line fell into disuse, but before Tumba Rail took over the lease.  The track diagram is fairly typical of many of the stations on the Tumbarumba branch 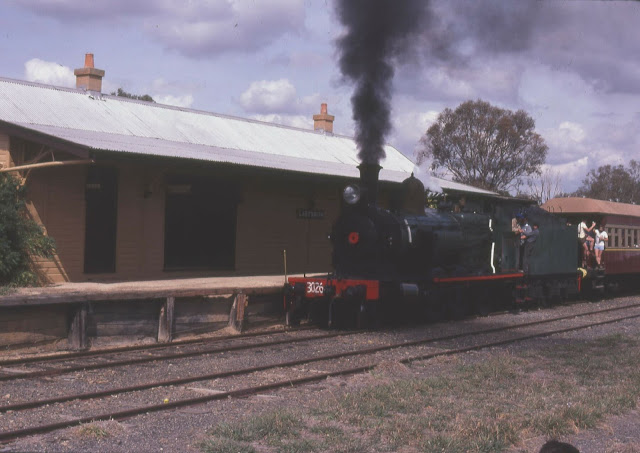 Tour train and Ladysmith station in the early 1980s.  The station is a typical NSW A4 design. 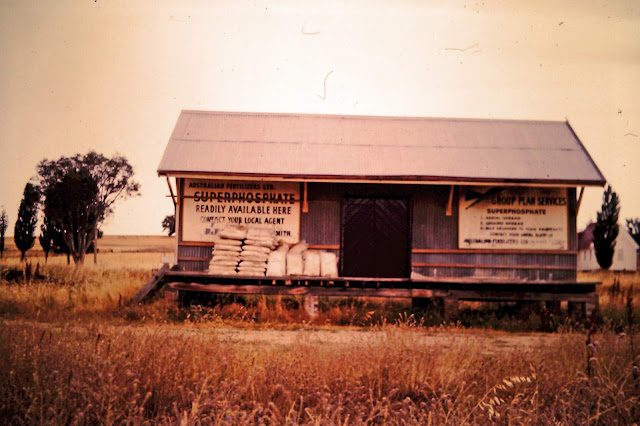 Goods Shed.  I just love the signs, AND the way the superphospate is stacked. 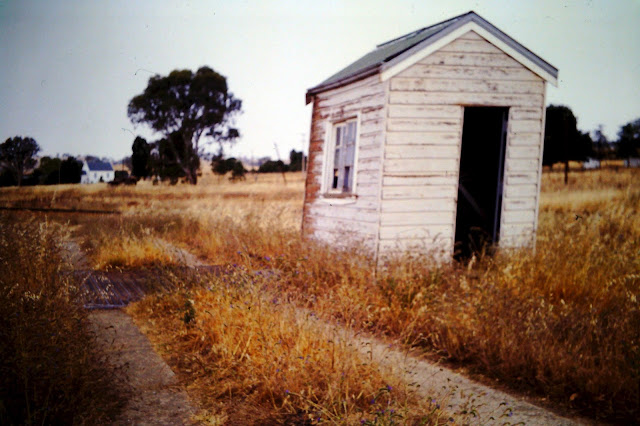 I hope you enjoyed this quick tour.  Apologies for the quality of the pictures - my el cheapo slide scanner is fast, but not very good.  I do have a better scanner, but it has to be attached to my desktop that runs XP, and each slide takes around 5 minutes to scan and process.  Time that would be better spent on modelling.

Thank you to all who have responded to me about my Blog.  It has been very encouraging   Happy modelling.