A quick view of the Mainline

One of the advantages of modelling a REAL railway, is that most of the structures you need have already been designed, and built 1:1 scale.  Unfortunately, I am starting this layout 47 years after my nominated time period, and many of the structures are gone.  Whilst I have great memories of watching trinas, I didn't obtain a camera until the late 1970s, and a car in 1980.

Wagga Wagga was too far away from  Sydney, so whilst some railway books have extensive coverage of the main south, they rarely managed as far south as Wagga.  Which is a shame.

But, fortunately, despite the expense of slide photography,, I managed to photograph a good percentage of what I am planning to model.  So, sit back and view a very truncated tour of the mainline through Wagga 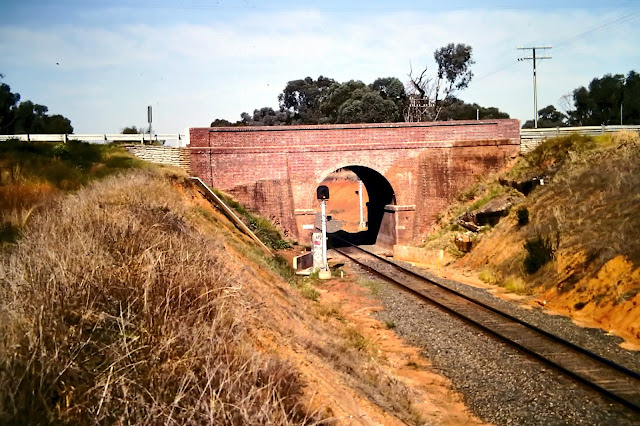 The Kapooka Road bridge will be the tunnel entrance to my Albury Staging.  This bridge was bypassed in 2016, and only last week, a contract to demolish it was finalised.  A real shame, but it would not have survived double stacking as part of Inland Rail 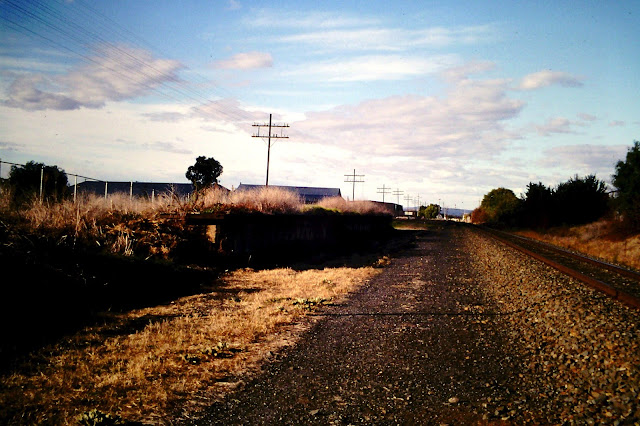 The trackage serving  Hardys timber, gasworks, and loading ramp has all gone in this view, 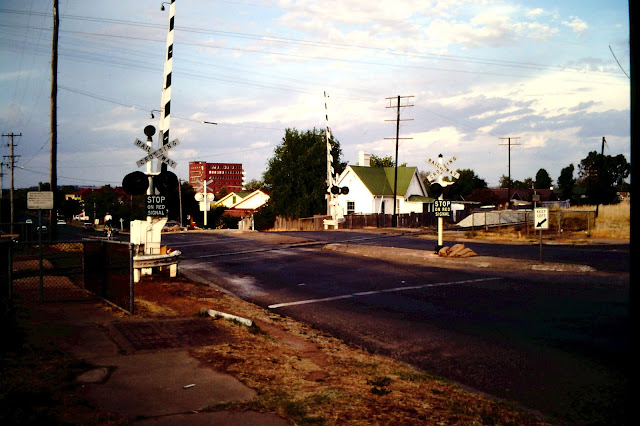 Docker street was originally a double track level crossing, with one of the tracks being the headshunt for the Hardys sidings  Gatekeepers cottage with the green roof is still in existance, although much modified 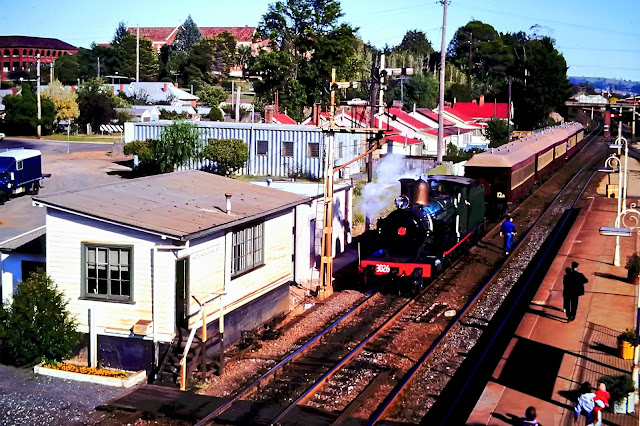 Coming into Wagga, under Best Street Bridge.  The signalbox disappeared in 1983 with CTC, and the railway cottages also were removed.  The original Best Street level crossing gatekeepers cottage (larger red roof)  is still in existence, but heavily vandalized, and probably will be demolished. 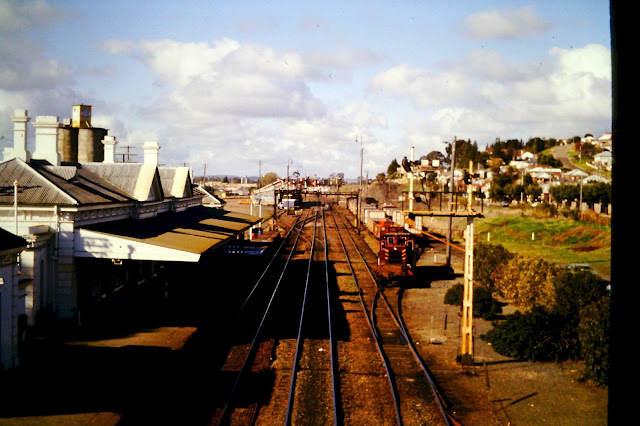 A view looking east with an X200 shunter.  Wagga in 1970 had around a dozen sidings, with much activity 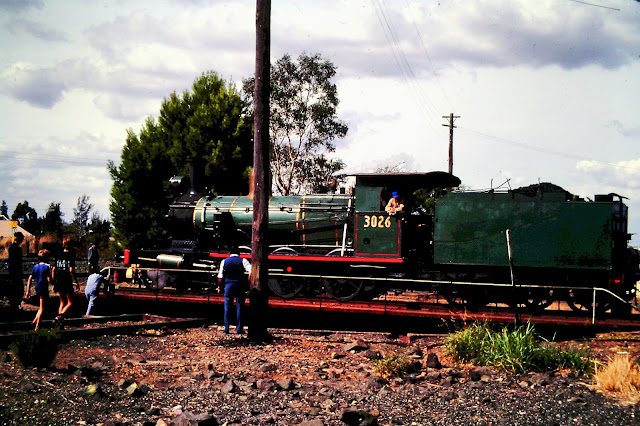 Turntable with 3026.  Lachlan Valley tour train.  Wagga had a water tower, and coal stage.  The Turntable was in place to turn steam locos that used the Tumbarumba branch.  I will cover this branchline in a future post 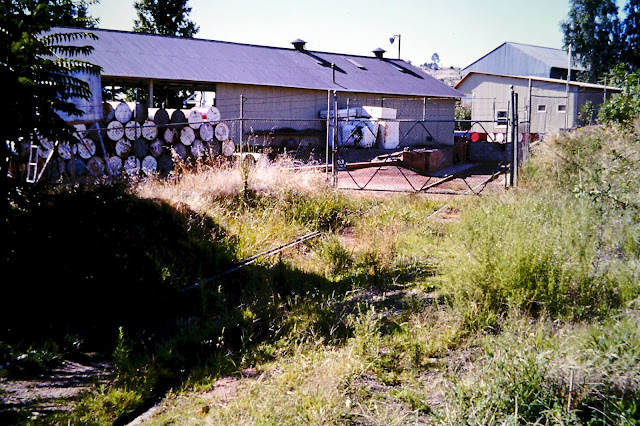 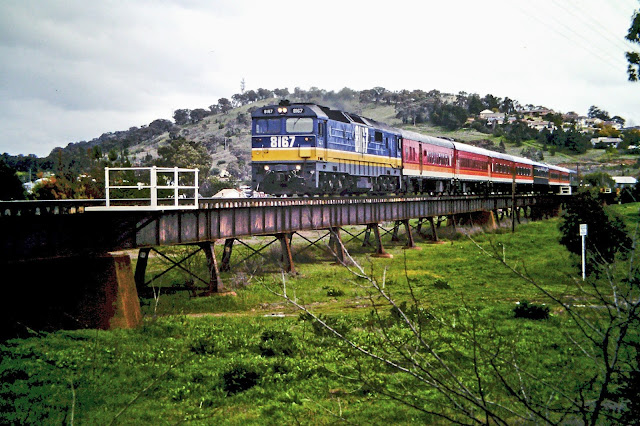 Leaving Wagga, the trains crossed the first of 5 viaducts across the Murrumbidgee river.  I will unfortunately only be able to model a very truncated section of this.  The River was crossed with 4 spans of 159' Whitton Truss - and this will be the subject of a future post. 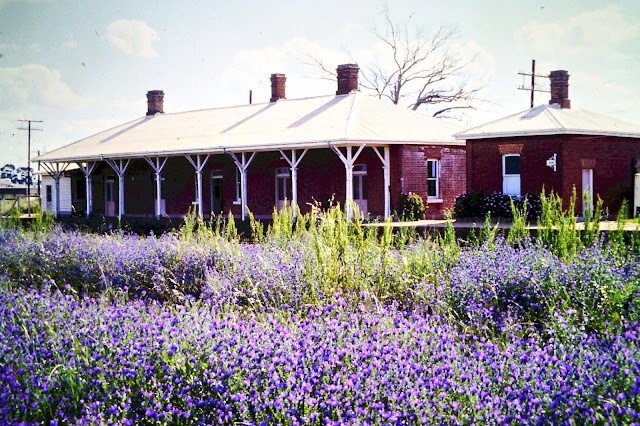 Bomen is a station at the northern end of the viaduct.  It has extensive stockyards, and meatworks.  Bomen today has a small intermodal yard.  It lost its large rail connected Mobil fuel depot last year, not that the NSW government ran any fuel trains since 2010.  The purple flowers are Pattersons Curse, Salvation Jane, Riverina bluebell, or Grasby Grass - depending on where you are.  This weed was a boon for Honey producers, toxic to horses, and fortunately is now biologically controlled, 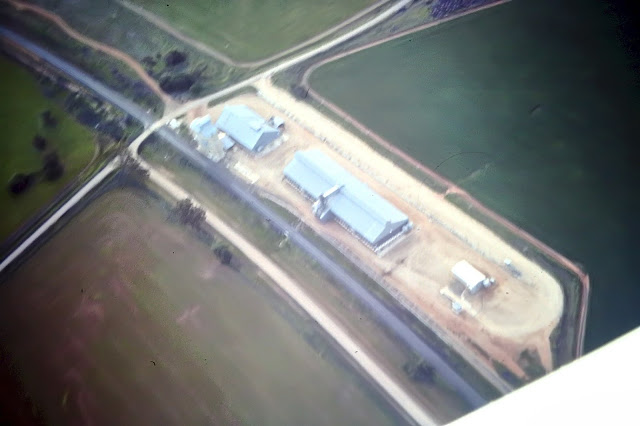 Shepards Siding is the end of my line - has a large silo complex.  Before the days of Google maps, I managed to get this shot from a light plane.  The silo is still there, and in operation.  My layout will extend around the silos, and disappear behind the backdrop down to Junee staging.