I have been thinking about constructing a HO model of Wagga for around 20 years, but until recently it has been not possible.  Well, I hope to shortly embark on what will be probably my last sizeable layout once I get the room prepared.

The size of the room - is 9 metres, by 6 metres (less a kitchenette) - and reside in the back half of my garage.  It will consist of 2 decks, and staging.
- The upper deck will be a representation of the Tumbarumba branchline, including Ladysmith, Borambla, Humula, and Tumbarumba stations,
- The lower deck will be the mainline - running from Shepards Siding, Bomen, Murrumbidgee River (bridge),  Wagga, and Wagga Stockyards.  The mainline will run from Junee staging, to Albury Staging - both stub ended staging years.  The mainline staging lead-in tracks can also be connected, to form a continous run.   Technically, the layout is known as a "X Factor" design - something that Tony Koester mentioned in  Model Railroad Planning (2009?)

I have not yet firmly settled on layout height - but the main deck will be approx 1 metre above the floor, and the branch 50 cm above that.

Timeframe for operations is approx 1970, but I am not going to be too picky here,  If I like a feature, or a train, then I most likely will  incorporate it.

Construction (once the room is finished) will be Staging yards - fully tested, and then the lower deck.  The upper deck is planned, but not needed initially.  The branch will include the sidings of the Wagga Shunt, and the rest of the branch may initially be staging.

Keen observers may notice that I have had to mirror image a number of the stations.  Shepards Siding, Bomen, Ladysmith, and Tumbarumba.   I have tried to stagger the  positions of all stations on the upper desk to not impact the one below.  Radius of curves will be 75cm for the main, and 60cm for the branch.  Gradients on the mainline are gentle, but a bit more for the branch - I do not know if I will need more than one loop on the helix for instance,.

Operations are utmost in the design.  The signal frame at Wagga will need a full time position, but the 56 lever frame that I have already built will get used.  Local shunting engine at Wagga serving all sidings in Wagga area,  Mainline trains are either through trains, or  dropoff goods at Wagga, and Bomen.  Railmotor passenger trains to Albury, Griffith, Tumbarumba and Kywong all terminate at Wagga.  Engine only movements (Junee to the out-depots of The Rock, and Albury). Goods train operation to Tumbarumba - fruit, timber, stock trains, general freight.  Wheat trains to Shepards Siding, and Ladysmith silos.   Mainline trains will run from staging yard to staging yard, without needing to shunt at either end.  The advantage of the X factor design, is that resetting staging for the next operating session is possible by simply reversing the trains across the hidden crossover tracks.  (There is a void in the corner behind the Murrumbidgee river bridge as a non operating position to manage this process outside an operation session.) 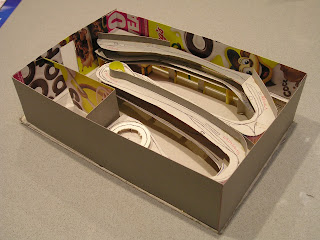 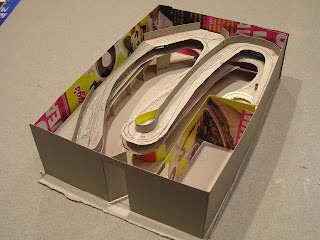 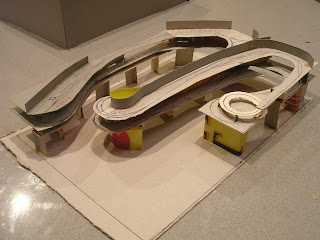 The model itself (pictures) is built to a 1/33.3 scale in card - and is more of a proving concept than an accurate model. Already it has shown up some pinch points in the isle between Wagga, and Shepards Siding (is 50cm - I want 75cm,) so there is still some adjustments which may reduce the isle width near the kitchenette wall.  The width of the stations( as well as the trackplan) will undergo tweaking too - and I hope to learn XDTrak Cad for the detailed design.  But, as a first step, the 3D model does what I need it to, as well as give my partner Tracy, something that she can understand.

It may take a decade to build, and another to scenic properly, but I think it is always great to dream.
Posted by Rob Nesbitt at 23:57