One of the satisfying aspects of building a model railway layout, is that one finds a use for many of the purchases one has made over the years.  Such is the case for the Tumbarumba Goods Shed. 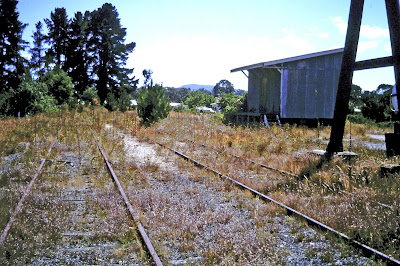 In March, 2000 according to the sales docket (17 years ago), I acquired the Bergs NSW G1b goods shed kit, and it remained unopened, and largely forgotten until 3 weeks ago, when I stumbled across it whilst looking for another kit.

If you have built a USA craftsman kit, then the contents and construction style will be familiar.  The kit consists of some thin plywood, a selection of stripwood sizes, a scribed sheet for the deck, some styrene resin and brass parts, a few sets of corrugated iron, and 6 pages of instructions and plans. 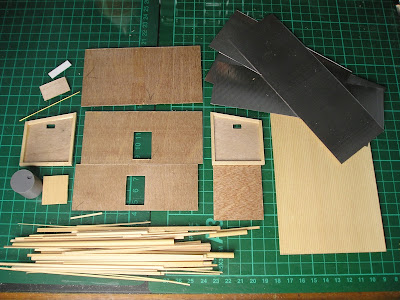 The first stage was to cut out the door, and vent opening in the plywood, and reinforce the ends with heavy stripwood. 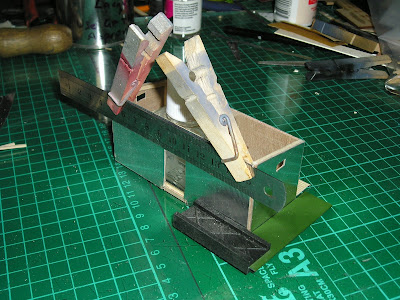 The next task is to cover the plywood with the corrugated aluminium, and trim the excess.  Assembling the walls, and floor makes up the box.  Note the metal ruler used to prevent the corrugations from being squashed by the peg clamps. 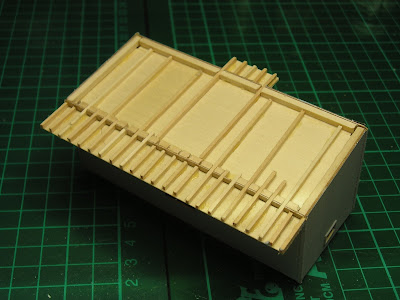 Fitting the floor joists  is the only real problem area of the kit.  Enough joists are provided for the full width of the shed, however, the shed construction has the rail and road shed sides extends below the floor level.  I am not sure that building the platforms and glueing them to the shed sides as recommended by the instructions is strong enough.  So I created  some gaps in the lower walls to get some of the joists through.   If I build another shed, I will make some amendments. 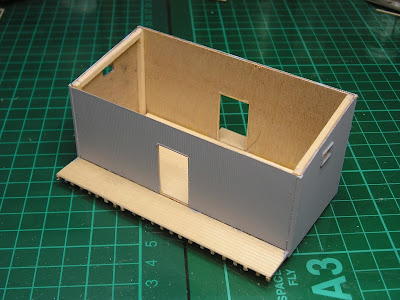 Bearer beams, trim, and walls edging cut and fitted.  I have also painted the walls with Floquil grey primer 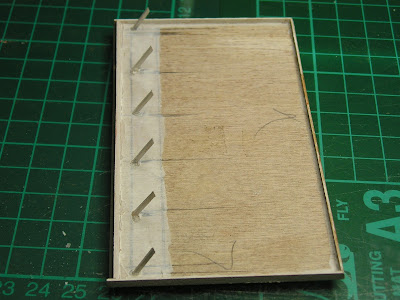 The roof is removable.  Thus created another set of problems - the first was that the awning support struts have to be positioned as such.  Both the kit, and the Greg Edwards plan show only 2 whimpy struts, where my photograph shows 6 longer struts. 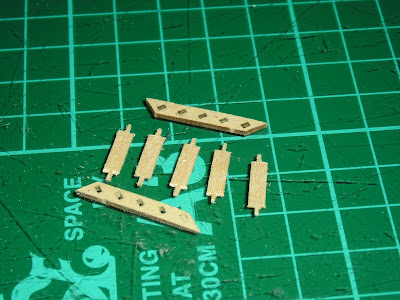 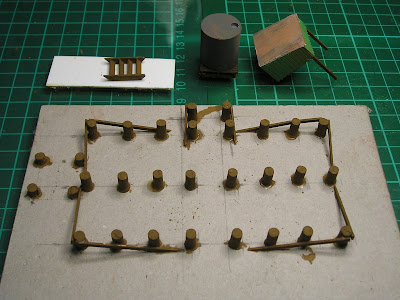 Small details were next,  After struggling to try and make up a set of steps, I decided to use the Walkers Models step sides that I had surplus from the Ladysmith goods shed kit built earlier.  I made up some steps from stripwood, and later reduced the height by one step.  I do not know if someone makes the steps,  but it would  be a neat 3D printed item.  The water tank stand is fabricated from stripwood provided, the resin tank painted, the water tank awning constructed fully from styrene sheet, and strip, rather than the kits wood parts.  Lastly, add the stumping on my heavy cardboard base.  The latter requires these stumps to be cut from dowel, and getting each stump base square, and each stump the same height is problematic. 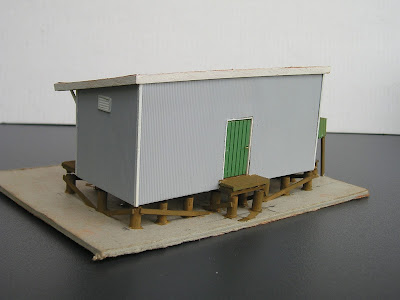 After fitting the timber guards, vents, doors, painting (yes the doors are green), the shed was positioned on the base, to enable the downpipe to be fitted (as per my  Ladysmith station building blog post a few months ago).  Rather tricky, particularly as the roof is still removable.  Fortunately, I can still make adjustments to fix the unfortunate gap on my model.

Lastly, I must mention that the roof is weathered.  The shiny aluminium was painted silver, and I used pastel weathering powders for the rusty look.  I guess I will have to do something similar for the shed sides, and wood platform prior to fitting on the layout.

Detail hounds might find some differences though with my model and the real thing.  Particularly the downpipe is on the RHS (other side), and descends to the ground, rather than to a tank.   And there doesn't appear to be any timber guards.  Well in my defence, I have no photos showing the shed's LHS, and the timber guards might have been removed and repurposed after the line closed in 1974.  But in the end, it is a model railway, and I like the shed as I have built it.