Shortly after I had finished my construction of a goods shed for Tumbarumba around 3 years ago, it was correctly pointed out that I had made a big goof - I had used the wrong kit.  I had used a Bergs  G1b kit, but I should have used the smaller G1a kit.

One of the reasons for writing this blog, was for information exchange.  And I have been rewarded with contacts from knowledgable people, a large number of photographs.   Fortunately, there have been a few published in the "Tumba Rail" booklets, although images on the internet are rare.

The goods shed I had made (described on the earlier blog-post),

was not right, so in some ways, I welcomed the opportunity to make a new shed

A few months after realising my mistake,  I acquired a Bergs G1a goods shed from ebay, and made a start on construction. 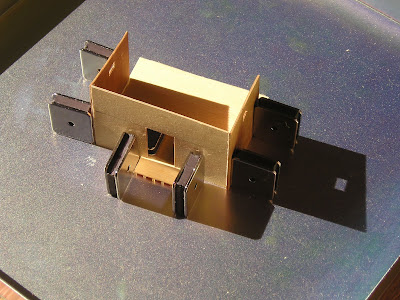 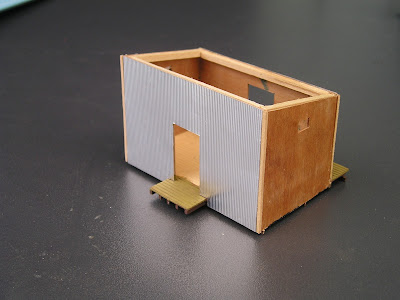 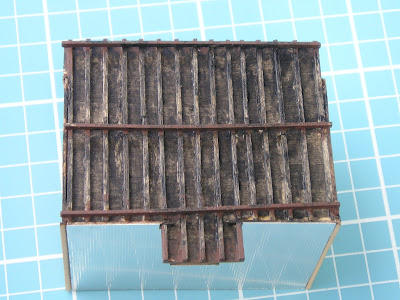 The techniques are similar to the ones used on the original build, although I did use a micromark magnetic clamp system for the basic shed.

However, my desire was to make new models, and the partially made kit was placed into a plastic storage tray, and moved to one side.

Whilst I should be powering ahead with Wagga station, I was getting far too many interuptions for a concerted effort to complete (read kitten, gardening, lawn mowing, etc), the goods shed was something smaller, and taking up space on the workbench - mocking me to complete.

So, its time had come.

One of subtle differences in the two sheds, was the supports.  The bergs kit assumes wooden piers, the Tumbarumba shed actually has brick piers.  I had made brick piers before for the Ladysmith goods shed - by wrapping superquick brick papers around square wooden pegs.  This time, try a new technique. 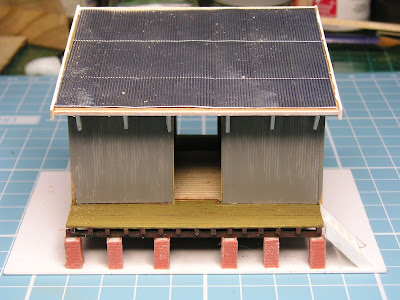 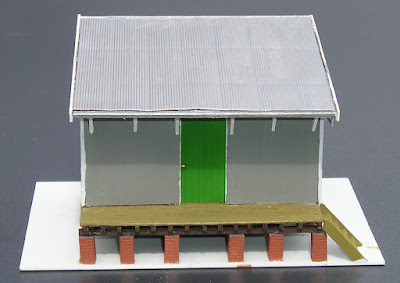 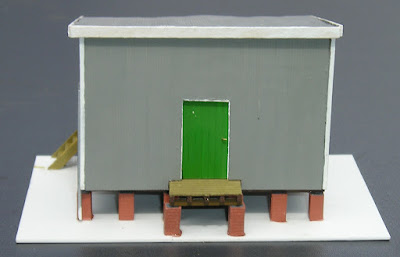 I have had a lot of fun finishing this model.  I tried out some new techniques, and happy with the end result.  Whilst, I may now prefer to build in just styrene, rather than a composite materials, it is good to not loose those skills.

Looking around my workbench, I note quite a number of unfinished projects - (eg. silo for Ladysmith, water tank for Borambola, lamp building for Bomen, DJH D50), and as a new years resloution, finishing these will be the goal.  I will let you know how I go via the blog.

And finally, a couple of extra pictures.

All the best for the festive season, and the upcoming year.
Until next time
Posted by Rob Nesbitt at 13:40