If I thought that finishing the styrene construction of the main Wagga Wagga Station was the end of the difficult part, I was kidding myself.  The station veranda, and platform awnings have added another degree of complexity.

As I have stated earlier, I needed to improve my styrene scratchbuilding techniques before I embarked on the Wagga station model.  So, I started with less ambitious projects – the kit bash of the Tumbarumba Station, the lamproom/toilet block for Ladysmith, the Wagga Wagga signal box, and the Bomen station.  Apart from the lever frames in the signal box, everything could be made from basic styrene strips, and sheets.  And the projects were of steadily increasing complexity

The Wagga Wagga station is a continuation of this increasing complexity , although the Victorian era ironwork would be a challenge, as styrene shapes would not be able to be used

Either I build the station without the ironwork, or try and find an alternative.

Fortunately, in my NMRA group I have access to the experience of Ross Balderson.  Ross needs no introduction from me, his modelling skills speaks for itself.  In 2018, I explained my problems over the Wagga Wagga station to Ross – asking his advice on using my copy of Corel Draw (I am a novice with this software)  My  thoughts were that one could import images into Corel, and those images could then be manipulated, and the results printed onto clear acetate, and cut to fit.

Anyway, Ross dismissed that idea, and said the best option would be to actually draw the patterns into corel, and then get them etched.  And, then he offered to not only do the drawing for me, but arrange to get them etched.

I could not believe my luck.  I readily accepted.

There was no point in arranging the etches early.  The Wagga Wagga station was still well in the future.  I suppose, that it took another 2 years from Ross's generous offer, before I enough of the Wagga station constructed so that the basic dimensions could be measured.

Ross, true to his word, asked for detail photos, as well as dimensions of the model, and prototype.

Armed with tape measure and camera, I developed this plan.

I emailed the plan, with a lot of detail pictures to Ross.  Ross then beavered away on Corel, and then emailed me back  small  etch mask for me to check dimensions

I printed the drawing, and it was extremely close.

Armed with this knowledge, Ross continued with the rest of the artwork/drawing

At the next NMRA meeting (beginning of 2021 - Covid restrictions were not that bad for an outside meeting at a home environment), I brought the Wagga station with me, and all the parts of the drawing were checked with the actual model of my station.  We picked up one error, and it was mine.  The 23.2 cm dimension on my plan was out by 2mm – should have been 23cm exactly.  That error, although small, was enough to throw out the platform awning.  Fortunately, the error was easily corrected with Corel Draw.

Ross then populated the future etch with items for his N scale Newcastle layout, and some HO detail items for me.   The price of the etching process is based on the size of the sheet, not what is on it.

I am indebted to Ross’s contact, Phil Badger – BadgerBits.  Phil uses a UK based etching company.  I knew the process could not be rushed, I had more than enough to continue with in the interim.  It was late in September, when Ross informed me that he had the etch back, and was removing his items.  The postal service was quick, and I had the etch a few days later.

First step was to measure the etches against the station.  Spot on.  There is some brass material to be removed from the end of the etch to make it fit snuggly against the wall, but nothing that the Dremel could not handle.

I removed the first etch, polished/cleaned the brass  with a track rubber (the only thing track rubbers are good for),  and then folded it over 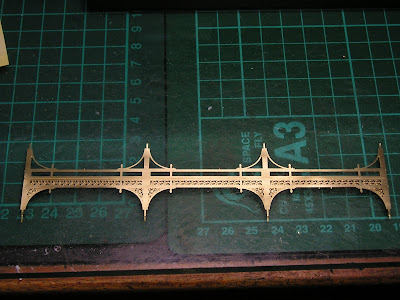 After folding, I lightly sweat soldered the sides together

The sloping floor for the veranda is made out of styrene.  The floor is hollow.  The floor was then trimmed to accommodate the wall blockwork.

The poles were made from brass, with a styrene base

NB The poles, or columns should be tapered, and fluted – this was a step too far.  The 1/16” diameter  of the brass tube is very close to scale at  half way up the actual pole  For completeness, the actual pole has a 40cm circumference at the top (approx. 12.5cm diameter), and 49cm (15.4cm) at the bottom of the fluted section. The octagonal base is 83cm circumference

Proof of the Pudding is in the eating

Locating the etch on the floor gave the locations for the poles.  Thus marked, I then reamed out the hole in the pole base styrene, as the floor was sloping slightly, and I didn’t need a solid fit for the poles as that would have them at angle.

I then loose assembled the etch, and poles onto the floor – then checked how things looked with a camera.  Well, my measurements were correct – the bottom of the etch brackets extended to the same height as the number of wall edge blockwork on the prototype. 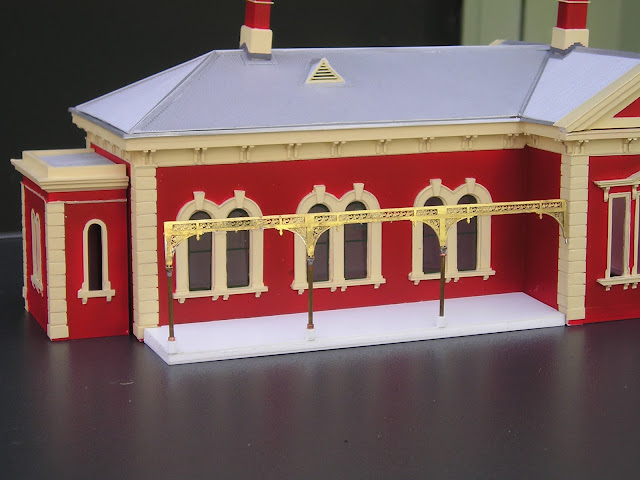 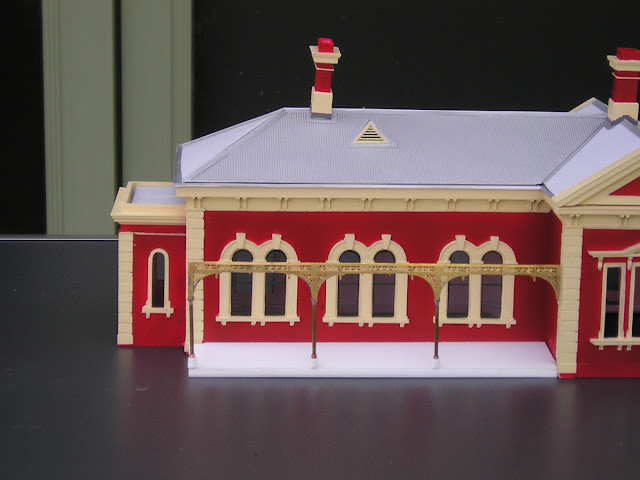 Next step was to fit the edge etch.  Folded like the main veranda etch.  This part required a lot of brass removal, with regular trial fitting so as to not remove too much material

Soldered to the original at 90 degree angle, once again, test fit.

Lastly (for this blog), I soldered the fret to the poles with 144 C degree solder.  By choosing a lower melting point solder, my original soldering would not desolder.

A good start.  I think the etch has really captured the feel of the prototype.  I have sent my pictures to Ross, and he is also well pleased that the etches have worked well.  Was that ever in doubt?

Next time - The veranda roof.