A Yard Crane for Tumbarumba

Way back in 1993, Stephen Johnson Models were offering a NSWGR 5 Ton yard crane kit for $55.  “Just what I need” when I bought the kit, although in 1993, I had little idea that it would take me another 24 years to actually build it. 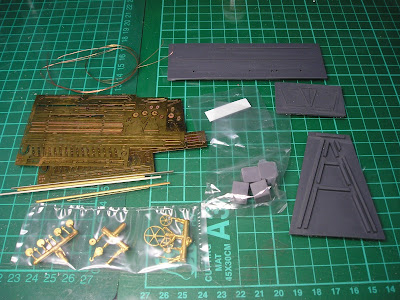 The kit consists of 2 small etch brass frets, some lost wax castings, wire, rail, angle brass, 4 resin blocks, a set of instructions, and 3 resin jigs to assist in the construction.

A review of the kit was in issue 179 (April 1993) of AMRM. (Thanks James).  This kit has a reputation of being difficult to build. The reputation is well earned.

As is my normal approach, I try and find as much information as possible.  Unfortunately, I had failed to photograph the full crane at Tumbarumba when I was there in 1980.  Greg Edwards Data sheets do have a HO diagram of the crane, but the details of the winch, and gearing was unclear. All is not lost.  These cranes can still be found in various locations, so  made a 55km trip out to Ganmain a few months ago, and photographed the 5 ton crane there. 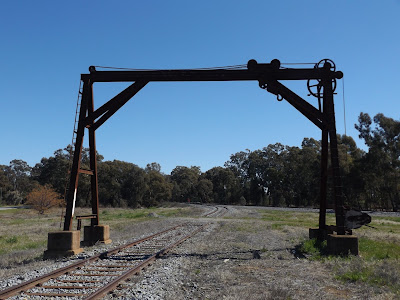 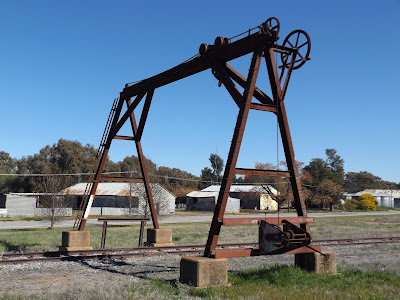 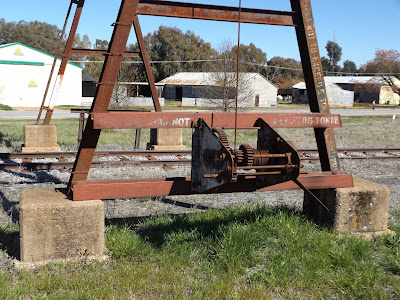 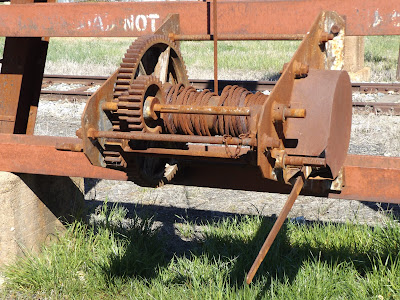 After I started the build, Paul F sent me a good picture of the Tarcutta 5 ton crane pictured above.  As Tarcutta is on the Tumbarumba line, it might have been similar to the Tumbarumba crane. Disappointingly, the picture shows the “other” style of 5 ton crane used in NSWGR, which is a hint that the Tumbarumba Crane might also be this style, and not the kit version. But, these are the risks one takes.

Bob S (see the SCR blog link), also sent me some scanned  diagrams of the NSWGR crane from the railway archives.  These diagrams showed the winch and gearing in large scale.   These diagrams proved invaluable. Thanks Bob

Anticipating a future step, I made winch spool rotatable.   However, I ran into a lot of problems in getting the top beams, and A frame assembled.  In retrospect, I should have made a jig to hold both A frames vertical, and not skewed.  Once the A frames are firmly held in correct alignment, then solder the pair of beams on top, and then add the cross bracing.  I won’t go into the method I used, but it almost resulted in the whole lot being launched into orbit
Even the bracket for the upper gearing was a significant exercise in alignment of the parts.

Attaching the ropes, and chains was at best frustrating.  The instructions advise twisting the fine copper wire supplied together to simulate the chain.  This was straight forward, and from a distance, doesn’t look too bad.  Looking at Bob’s supplied plan, the upper chain goes from the trolley, and winds above the pulley, then go over the trolley to the other end, when it returns to the trolley.  (The instructions suggest the chain should go around the pulleys in the other direction, and the chain is hidden behind the top beams).  The chain descending to the bottom was also just a matter of getting the length right.  However, the brass wire supplied for the winch to the hook gave me lots of problems.  Basically the wire supplied was too hard, and fractured easily.   Solution straight forward.  I substituted some softer “tinned”copper  wire –taken from stripped insulated hookup wire.  This wire bent easily, and allowed me to wind it around the winch spool 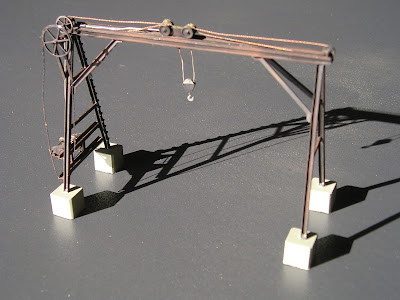 Now that I have this crane built, I discover that there was also a crane at Ladysmith.  So unless another SJM kit appears, I might just have to throw money at the problem, and acquire the 5 ton crane model being sold by “The Model Railroad Craftsman” at Blacktown (even though this has an error in the bracket for the winch being on the inside of the “A frame”, and not the outside.  Who is going to be this nit picking?).