Wagga Wagga Station - The other buildings (2)

Other platform buildings  - Construction continues, and some paint

At the last end of the last blog, I had just started working on the roof of the Museum building.  After making this similar to my earlier method on the main Wagga station building, I needed a security fence.  This is something that would have been easy with etched brass - but I wasn't thinking this far ahead when I had the etches made, it left little option than to fabricate it from scratch. 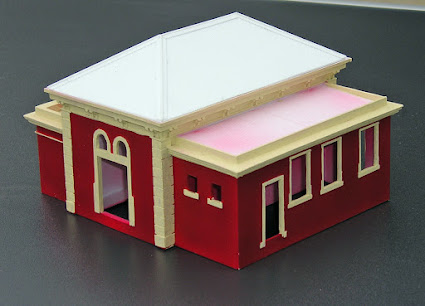 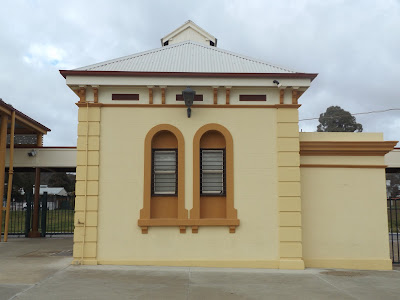 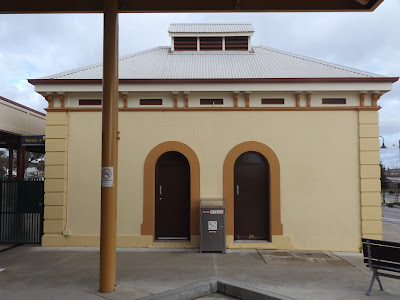 The roof of the Gents toilet includes a distictive cupola, containing a number ot vents.  I didn't have any measurements for this, so it was a bit of trial and error, using the above pictures for reference.

Start of the diorama

As many have guessed, I am planning a station diorama.  When will this project ever be completed?
Wagga  Railway Heritage museum visit
On Wednesday, I picked up Pete Neve OAM from his home in Junee, and travelled to the Wagga Museum meeting rooms, housed in the old rest building within the railway environs
I displayed the Wagga and Bomen stations, and Wagga Signal box.  The models were favourably viewed, and it was good to get some discussion going.  I asked about the original railway plans for the now museum building being different - and apparantly, the railway plans were wrongly sized, as there was never any changes to the very thick walls.
Peter Neve reminded the people attending, that this year is the 60th anniversary of the through running Sydney to Melbourne on the standard gauge.
My model of the station was not the only Wagga station model.
Until next time.
Posted by Rob Nesbitt at 18:16